Weekly Outlook for the week of February 11 2013 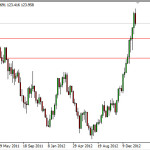 Over the course of the last week, we have seen quite a few changes in the attitude of central banks and watched the Forex markets react accordingly. Early in the week on Monday, we saw the Reserve Bank of Australia hold its rates, which suggests that perhaps the Aussie economy is starting to lose steam. Because of this, the Australian dollar continues to struggle overall, and as a result is under performing many of the other currencies around the world in relation to the US dollar.

The Japanese Finance Minister also spoke over the course of the last week, and complained about the rapid devaluation of the Yen. This turned the trend in the Yen, and saw quite a bit of short covering for the Japanese currency. You can see on various Yen related crosses that we had reversals later in the week. For example, the EUR/JPY pair fell rather steeply on Thursday and Friday, and the USD/JPY pair actually formed a shooting star on the weekly chart. Because of this, it appears that the USD/JPY pair is going to pullback, perhaps as low as the 90 handle. The 90 handle should be supportive. We have a hard time believing that this pair will fall beyond that level. However, we have seen 14 weeks without a red candle. Because of this, a pullback is desperately needed. Below you can see just how overextended the USD/JPY pair is on the weekly chart…

One of the biggest surprises during the week was the mention of the excessively expensive Euro by the European Central Bank on Thursday. This caught the market off guard, and a lot of the long positions were rapidly reversed. We had originally broken out of an inverse head and shoulders, but this completely reversed the momentum of the pair, and as a result it appears that the market is suddenly very bearish. However, over the long run we still believe that the Euro will continue higher against the Dollar. After all, the ECB has actually done anything, other than complain.

Going forward, it looks like we will be buying the Euro at lower levels, as there should be plenty of support at various levels. 1.32 is one obvious spot, but to be honest by the time we reach the 1.30 level we will have had to have broken several minor support levels, and as a result we do not think that 1.30 will be attempted seriously. Because of this, the Euro will more than likely continue its weakness for the beginning part of the week, but buying Friday we expect a bit of a reversal and continuation of the uptrend.

The market needed to reverse the over extension of several pairs, and it appears that this is now happening. The Yen is by far the most important one to pay attention to. We still believe that selling the Yen is the way to go, but better prices are ahead. We are especially interested in the EUR/JPY pair, as it could fall the farthest without violating the uptrend. A move down to 120 or even 115 is possible. We will be buying supportive looking candles at that point.