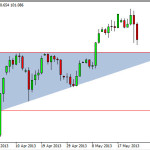 The Forex markets spent most of the last week trying to frustrate as many traders as possible. The Yen-related pairs all pulled back, mainly on concerns out of China as the HSBC PMI number came out at just under 50, signalling a slight contraction in Chinese manufacturing.  The idea is that the Chinese are starting to slow down manufacturing, that means that the global economy certainly must be slowing down as well.  However, the market probably got well ahead of itself and finally sold off these pairs as an excuse for the pullback that has been long needed. Quite frankly, the numbers were just a few tenths of a percent below the 50 level, meaning that it was a mere blip on the radar.

Because of this, we may have buying opportunities in the USD/JPY and EUR/JPY pair coming towards us.  Both of them showed signs of support towards the end of the Friday session, and the USD/JPY pair is hovering at the 101 handle, an area that should be the start of massive support down to the 100 handle. In the case of the EUR/JPY pair, we're just above the 130 handle, which of course did cause a bounce late Friday . Both of these areas on the charts below are very significant in the health of the markets.

One area that may catch Forex traders off guard would be the USD/CAD pair. This market has quietly been bullish for the last several sessions, and has now broken above the 1.03 level.  The 1.03 level has been very resistant previously, therefore any break above that area is significant.  The Canadian “safe haven” status that had been the norm over the previous year seems to be crumbling, this pair could be on the verge of a breakout.  A move above the 1.04 level could open up the door to the 1.10 handle.  Keep your eyes open on this pair, as it will be one of those moves that is extraordinarily swift. This pair has a long history of grinding sideways, and then suddenly exploding in one direction or the other.

During the next week, there is very little in the way of economic announcements to move the markets. Memorial Day is Monday in the US  and a bank Holiday in the UK , hence  the Americans and British won't even be at work.  Beyond that, the rest of the week should be relatively normal.  During Tuesday, BOJ Gov. Kuroda speaks at the Bank of Japan's Institute for Monetary and Economic Studies 2013 International Conference, which while it shouldn't cause too much concern,  could open up the possibility that he does say something a bit aggressive that could move the markets.

We believe that the Federal Reserve will continue to be the biggest player in the Forex markets, not through direct intervention but more through whatever comes out of a member's mouth.  We have certainly seen this over the last couple of weeks, and its for this reason we think that the markets could be very choppy going forward.  Make sure that you keep your stops fairly tight, keeping a close watch on what's going on around the world as far as headlines are concerned.