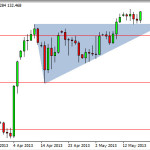 The Forex markets had an interesting week over the last five sessions, as we saw the Yen lose value yet again. That being the case, it looks like the Bank of Japan should continue to have the upper hand when it comes to the valuation of the currency. As you probably know by now, the Japanese are stepping into the bond markets to bring down the value of their currency.

On the other hand, we have the Euro which took a significant loss during the week due to several concerns when it comes to the European economy on the whole. On top of that, it does appear that recessionary headwinds are still out there, although there is talk of a “base” being put into the European economy at the moment. Nonetheless, Europe is an absolute mess when compared to the United States, and therefore we saw the EUR/USD pair break down significantly.

The Euro continues to struggle against most currencies, with the exception of the Yen. Looking at the EUR/JPY pair, you can see that the 131 handle has now acted as support on the retest, and it looks like were ready to go higher. Based upon the break of the ascending triangle, it appears that we should head towards the 137 handle during this phase. However, as a side note, it should be mentioned that the longer-term charts show a potential move to the 115 handle based upon a bullish flag that had broken a few months ago. There is nothing on this chart that suggests that this can't happen.

It should be noted that the risk assets in general are doing very well, and as a result of central bank liquidity being pumped into the marketplace, the stock markets worldwide have absolutely shot straight up. One of the most stunning examples of this is the DAX, which of course is the German index. Going forward, this is a perfect example of how the “riskier assets” seem to be doing well, but there is a bit of a misstep when it comes to the currency markets. Compare the two charts below, one is the DAX, and the other is the Australian dollar. Both are considered to be “risk assets”, but obviously the commodity-based risk assets is been shunned for the more traditional stock markets.

Going forward, it should be noted that the US dollar seems to be the strongest asset of all. Highlighting this is the fact that the US Dollar Index broke above the 84 handle during the session on Friday, and as a result has broken significant resistance. So while many of you will be used to seeing a “negative dollar, strong stock market” correlation, there are times in the past where the strong US dollar did in fact mean higher stock market prices as well. This is a fundamental story, which is based upon the fact that the US economy is doing better than many of the other ones out there. Going forward, it appears that the US Dollar has absolutely nothing stopping it from hitting the 88 handle in the “Dixie”, and as a result we should continue to see Dollar strength.