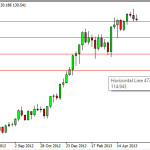 This week could be a real dogfight.

This past week in Forex was a bit choppy, but in general it looks that the upcoming week will be much more interesting than this last one. The market saw a lot of the Yen related pairs sell off late in the week. The EUR/JPY and USD/JPY pairs both formed shooting stars on the weekly charts, but are both sitting on top of the massive break out points that lead to this latest leg up in these markets. Because of this, we believe that the next week is going to be very important for the Yen in general.

As you can see by the comparison, we are at a very important level now. The sell off that we saw on Friday would have been very exaggerated by the rebalancing of several major indices in America. We saw a lot of the bullishness sucked right out of the market in late trading hours in New York. However, the end of the day shows that we are indeed at very important levels in almost all Yen-related pairs, and as you probably know – these pairs tend to be representations of risk appetite. Because of this, we could see a sell off around the world with many of the “riskier” assets if things don't work out.

Oh, and just in case that isn't enough….

The Non-Farm Payroll number will be released on Friday, and as a result this week could be very important for the USD/JPY pair. The main reason is that it will give traders a possible insight into what what the Federal Reserve might get ready to do. The idea that the employment situation in the United States shows significant improvement would have massive implications as the Fed could pull back from QE fairly soon. This would of course increase the value of the USD in general, as rates should rise slowly, and the economy in the US would add yet another element to the positivity of investing in the Dollar. This will be especially interesting against the Yen, where the Bank of Japan plans on devaluing the Yen as much as possible over the next few years.

The pair pulled back like the EUR/JPY, and as you can see we are sitting on top of massive support, so this week could matter in a big way.

The Australians will have an interest rate decision on Tuesday, and this will be watched closely by a lot of traders as the Aussie has been so beat up lately. The market has sold off so drastically that the market will need more information to keep selling off. However, if we can get below the 0.95 level, we see no reason why the market won't eventually target the 0.90 handle.

The British will also have an interest rate announcement on Thursday, but in general most people don't believe that a lot will come of it. After all, the next Bank of England Governor Marc Carney will be coming in July. As a result, we expect action then. However, it is possible that the monetary statement could give hints as to what the BoE will do in July when he gets there.