FX Market RoundUp For The Week Of January 7th 2013 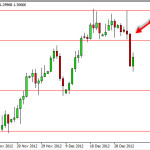 Over the course of the last five sessions we have seen quite a bit of action in the FX markets. However, it should be kept in mind that the first week of January is still a relatively light week as far as volume is concerned. Additionally there is the fact that the Non-Farm Payroll numbers came out on Friday, and this means that the previous week was a bit of an anomaly as far as price action was concerned.

One of the first areas that we saw a significant move in was the EUR/USD . The 1.3150 level has been significant support recently, and this of course was smashed through this past week. This suggests that we are going to go much lower in the EUR/USD pair, and probably test the 1.29 level for support. Part of the move would've been predicated upon the idea that the Federal Reserve minutes suggested that there was an increase in dissension amongst the members that vote on policy.  A shortening of the quantitative easing period from 2015 to an undetermined point in time had a lot of people buying US dollars as a result.

The Non-Farm Payroll numbers came out as expected, so this would not have caused much of a surprise. The US economy continues to improve, albeit at a very slow pace. The economic and employment situation in the United States is starting to stabilize, and this of course is good as it shows that the world's largest consumer can perhaps start to pick up some of the slack that Europe will certainly leave behind as it falls into recession.

The AUD/USD pair was an interesting study in the reaction to the employment numbers. On Friday, we saw a dip in this currency pair, but you saw the 1.04 level act as support. This area produced a significant enough bounce after the announcement was made that we formed a nice-looking hammer. Granted, it isn't placed as we like it to be, but it does suggest that there is a significant amount of pressure on the 1.05 resistance area. In fact, if we can get above the Wednesday and Thursday candles, it looks like we could test the 1.06 level in relatively short order. Above 1.06 is a clear path to 1.08 and then 1.10 as measured by the larger consolidation area that we would be breaking out of.

Looking at the EUR/AUD chart on the weekly time frame, you can see that this market suggests that the EUR should see weakness against the AUD. This makes sense as you are simply “triangulating” the pairs in order to determine the strength and weakness of each currency. Looking at this chart, we can see the the 1.25 level as an important area, and that breaking below it should signal much lower rates.

In other words, we are thinking that the action might be in the crosses this week…..