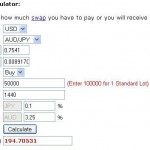 The History of Carry Trades

In the decade stretching from 1997 to 2007,  and with interest rates in Japan falling to very low levels and those of the Oceanic countries (Australia and New Zealand) rising to record levels, traders pounced on the AUDJPY and NZDJPY currency pairings, propelling the AUDJPY from just above 55 Yen to 1 Australian Dollar to more than 107 Yen to the Australian Dollar, before the global financial crisis forced the cutting of interest rates in the developed world and the unwinding of the carry trade strategy.

Fortunately Australia was partially insulated from the effects of the global financial crisis. With its major trade partners like China doing well economically, the Australian economy was not as badly hit by the meltdown as those of the the US and the Euro-zone.  Interest rates are therefore climbing again while those of the US and Japan remain firmly rooted at less than 0.1%, providing new opportunities for the carry trade.

How is a modern-day retail trader expected to trade the carry trade?  This can be summarized in the following steps:

Example of a Carry Trade
Earning from a carry trade is done in two ways:

a) From the interest rollover swap payments made into the account daily.
b) From the capital appreciation on the trade.

A trader named Uncle John decides to trade the carry trade strategy on the AUDJPY, placing a long trade with 0.5 lots at 75.50 and exits the trade at 83.00, making a gain of 750 pips. How much has he earned from the carry trade?

a) Profit on the capital appreciation on the trade:

Using the swap rollover calculator on Forexoma as shown below, the trader would earn about $194.71 in swap for holding the position open for 60 days (1440 hours).

Euro, Yen, and Commodity Currencies for the week of January 14th 2013