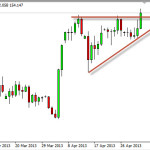 This past week in the Forex markets saw quite a bit of action, as did all markets for that matter. Without a doubt, the highlight of the week would've been the US Friday jobs report numbers which came out much better than anticipated. The United States added a total of 165,000 jobs during the month of April, as opposed to the anticipated 146,000. Even more impressive, the market learned that the Americans added a revised 138,000 jobs for the month of March, as opposed to the 88,000 that had previously been reported. Because of this, “risk on” became the phrase of the day.

The usual suspects all rallied during the Friday session, including the USD/JPY pair. On top of that, the Dow Jones Industrial Average broke above the 15,000 level for the first time ever, although it failed to hold above that level. The S&P 500 finally cracked above the 1600 level, an area that had caused it quite a bit of trouble over the last week or so. This sets up another “leg higher” in this marketplace, and we have found over time the S&P 500 is without a doubt one of the best risk barometers out there.

Going forward, we feel that this signals that the “risk on” currency pairs will continue to do well. The EUR/JPY pair is banging up against the 130 handle again, and we do believe that eventually it breaks out. On a daily close above 131, we feel this market could go as high as 135 in relatively short order.

However, if you pay attention to the British pound in general, you know that it has done fairly well. Because of this, we feel that the GBP/JPY pair may have “legs” at this point time, and the move above the 154 level during the Friday session certainly would've done very little to dissuade people from thinking that this pair was going to go higher. In fact, this was the breaking of a bullish triangle that should now see this market go about another 500 or 600 pips depending on where you measure it. This essentially gives us a target of 160.

One of the most widely used gauges of economic growth is because her market. Most Forex traders are woefully unaware of this, and as a result missed out on a great trading indicator. Friday sold the High Grade Copper market absolutely explode to the upside, gaining 6.41%. This is an extraordinarily strong move, and something that doesn't happen very often. Quite simply put, absolute fortunes were made in the copper pit during the Friday session.

One of the main reasons that copper is considered to be so predictive, is the fact that it is used in so much construction. Quite typically, you will see the copper markets react Chinese data, which of course reacts to American data. This is not only a construction play, but it also does well for manufacturing as well as demand for copper rises as more “things” are being built. Because of this chart, we feel that there was a significant change of attitude on Friday, and that “risk on” should continue going forward.