The Week in Forex May 13th – Yen Under the Microscope Again 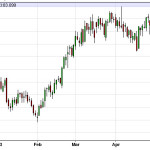 The Yen takes a beating. Again.

The Forex markets sold the Yen off drastically again during the previous week, as the most important level in Forex gave way: The 100 level in the USD/JPY. The area had been supposedly the scene of massive option barriers as the larger players out there will have done anything they can to keep the options profitable. We will never know how that actually turned out, or if it was just a simple case of the options expiring, and the barriers being lifted. Nonetheless, the level has given way, and it appears that the market is going to have another leg higher now.

The market had formed a nice looking ascending triangle, and that has been broken now. The 100 level giving way appears to set the market to move to the 104 level at first, and then 105, followed by 110 eventually. In fact, we think that 110 by the end of the year isn't impossible by any stretch of the imagination. The Bank of Japan will certainly continue to work against the value of the Yen, and as a result this trade (long USD/JPY) should continue to be the “trade that keeps giving.”

The Australian dollar fell hard at the end of the week as well, breaking the parity level at one point against the USD. The Aussie continues to be beat on as the commodity markets fall in general. The biggest culprit is the increasing value of the US dollar, which is of course is working against the gold markets as well. The market for gold against the Dollar looks very weak, and the Aussie is showing the same kind of sentiment. However, the market bounced back above the parity level by the end of the session. It appears that the Aussie is going to put up a fight though, but let us not forget that the Reserve Bank of Australia just cut rates, and didn't exactly give a rosy outlook on rates afterwards.

Going forward, the Dollar looks like it is going to be favored yet again, and as a result there is a simple trade in the FX markets now: Buy the Dollar. It looks as if it will continue to be the trend, and as a result the US Dollar Index looks like it is ready to break out. The 83.50 level is the first hurdle, and the 84 level is a long-term buy signal.