Forex Markets for the week of February 4th 2013 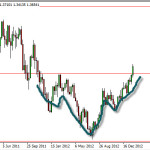 The Forex markets had a few interesting turns this past week, and without a doubt the most important one would have been the EUR/USD closing above the 1.35 level. This confirmed a suspicion of ours about an inverted head and shoulders pattern with the neckline being at the 1.35 level. Because of this, the EUR/USD pair could very easily run to the 1.50 level over the long-term. In fact, the Euro is one of the most favored currencies recently, and the Federal Reserve has recently acknowledged that its monetary policy could run much longer than anticipated. This makes for a “perfect storm” if you will of strength in this pair.

On the chart below, you can clearly see this pattern, and everyone else can as well. This is what makes it such an interesting trade, as the entire world watches. For the long-term trader, this is the type of trade they can make an entire year in a relatively painless fashion. As long as we are above the 1.35 level, longer-term traders will be buyers of this pair.

Looking at another “risk on” pair, the NZD/USD appears to be on the verge of a serious breakout. The Friday sessions all the market closed just below the all-important 0.85 handle, which as you can see on the chart below is an obvious resistance point. If we can get above that level, based upon the recent consolidation we feel that the New Zealand dollar could go as high as 0.95 in the long-term. Certainly, a run to the 0.88 handle in the short term wouldn't be asking too much.

The Kiwi dollar tends to outperform when there is an anti-Dollar rally. It appears that several currencies are starting to outperform the US Dollar, and as a result we could see real strength from the Kiwi. Nonetheless, a daily close above the 0.85 level would be needed to convince most traders to risk their trading capital.

The US jobs numbers came out at 157,000 for the month, roughly in line with expectations. The unemployment rate ticked up 1/10 of a percent, and the revisions from the previous month added another 40,000 jobs. This of course is a bullish sign, not necessarily because the numbers were outstanding but rather that the US economy keeps adding jobs overall. While this is a not necessarily enough to start some kind of massive bullish run, we believe that in a marketplace that is looking for an excuse to rally at any given moment, this will sustain the buyers for a certain amount of time.

The Federal Reserve continues to pump money into the system, and because of this we feel that a lot of traders simply need to buy into the stock market in order to make some type of yield. In a world that sees a 10 year U.S. Treasury note yielding only 2%, we have a situation where stocks and more importantly – dividend stocks – are looking more more attractive. As that happens, “risk assets” such as the Euro, Kiwi, and other currencies will do well against the US Dollar.