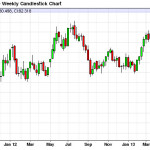 During the previous week in the Forex markets, we received quite a jolt from the Federal Reserve as they stated on Wednesday that the central bank would be pulling back from buying bonds as early as the fourth quarter this year, and if current projections continue with the United States and its economy, could be completely out of the quantitative easing game by the middle of next year. This was a full 12 months before the markets had anticipated, and  we have now seen the US dollar strengthened drastically against certain currencies, and in the US Dollar Index overall.

As you can see above, the US dollar certainly was strong against a basket of other currencies. Is all this and not only the Forex markets, but also in several the commodity markets. We saw the oil markets, precious metals, and almost all of the other commodity markets fall over the past week as almost everything in the commodity markets is priced in US dollars. Without a doubt, one of the most significant and impressive moves would've been found in the gold market. We saw gold fall below the $1350 support level by the end of the week, with Thursday being a particularly nasty session. Now that we have broken below the $1300 level,the gold market looks like it's going to be a “sell the rallies” type of marketplace for the short term. In fact, we would not be surprised at all to see the gold markets reach for the $1100 level, or possibly even $1000 before it's all said and done.

On top of everything else, we saw the EUR/USD pair find the downtrend line from the weekly time frame far too much to overcome. This coincided nicely with the1.34 level, and as you can see on the chart below, the market did in fact pullback. The real question now is whether or not the Euro can get a bit of a bounce just below where we suspect that there is a bit of support, or will the market find its way down to the 1.28 handle? In the end though, we do believe that the US dollar is flexing its muscles, and as a result as a general rule we simply do not want to sell the Dollar at all. We are looking for week currencies to pair it up with, as we by the Dollar, and sell whatever seems to be struggling at the moment.

This upcoming week, we are watching:

Tuesday should see the New Home Sales announcement on the United States give us a little bit of a heads up on whether or not the housing recovery is actually picking up speed. This is been a particularly positive part of the US economy, and as a result we think that a strong showing should make yet another reason why we should have a strong Dollar. Expected is a reading of 465,000 new homes sold. A lot of the contents on Wall Street have been counting the housing markets as one of the main reasons for bullishness on America. Because of this, we could see a little bit of volatility based upon this number.

On Wednesday New Zealand comes out with Trade Balance numbers, and as a result we could see the New Zealand dollar did throw around during that announcement. This is especially true considering that the announcement comes at a point in time during the trading day when basically the Kiwis are the only people up and trading. Because of this, you can see sudden movements in a very short amount of time, and then the markets to sit still until the Japanese show up.

Thursday has the United Kingdom Current Account number come out, and Canadian GDP comes out on Friday. With that being said, both the British pound and Canadian dollar could be movers late in the week.

We are looking at these announcements as potential catalysts for currencies to fall or rise against the US dollar. All things being equal, we believe that the US dollar will continue to strengthen, and as a result we are looking for serious misses in these economic numbers to find a currency to “pick on.”