The Week of August 19th in Forex – Choppy Markets 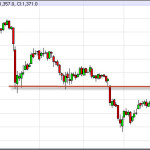 This past week in the Forex markets all continue to US dollar weakness, against many of the currency pairs that we track.  One of the most significant breakouts has been in the gold markets, as the $1350 level has been such a nasty bit of resistance, which has now been broken. In fact, it should be noted that Friday didn't necessarily feature much in the way of profit taking, so this leads us to believe that the bullishness in the gold markets will more than likely continue. Without a doubt, one of the biggest drivers of the gold markets is the value of the US dollar, and as long as it continues to weaken, gold should go higher.

Also of interest is the fact that the Euro gained significantly off of the bottom of the weekly range against the US dollar. This also tells us that the US dollar is on its back foot right now, and we could see significant weakening. Don't forget, the Federal Reserve and whether or not it's going to taper off of quantitative easing is the biggest questions facing the Forex markets at the moment, hence we feel that there is a lot of volatility coming.  However we do have to admit the fact that the Euro certainly looks like it's going to continue to go higher against the US dollar, and a close above the 1.34 area on the daily chart would be more than enough to get us to start buying.

It looks as if the markets are starting to that that the weaker than expected US economic numbers will force the Federal Reserve to continue quantitative easing at the levels that we have seen over the last couple of years. This of course would be Dollar negative.

Casting a look at  other Forex markets, we can see Dollar weakness everywhere. Silver, oil, the British pound, and many other markets are showing that the USD could in fact be in serious trouble at the moment.  Despite this, let us not forget that the markets are going to be extremely headline driven, and any hints that the Federal Reserve may go ahead and taper anyway would  push the value of the US dollar much higher. If that's the case, expect plenty of volatility.  Also you should be aware the fact that the real decisions being made about the US dollar will in fact be made known sometime in September, so between now and then expect a lot of nervous traders out there. Nervous traders lead to choppiness, so by all means be very careful with your positions.

Coming up this week, the Reserve Bank of Australia has a release of the monetary policy minutes from last month on Monday. This could have an effect on the currency markets, as the one Australian dollar has been beat up so horribly lately. However, at this moment in time we are not expecting anything major but there are always possible shakeups.

Existing Home Sales comes out of the United States on Wednesday, as do the FMOC meeting minutes. As if those two announcements will be enough to move the markets on Wednesday, the HSBC Flash Manufacturing PMI numbers come out of mainland China during the same session. Without a doubt, Wednesday has the most likelihood of moving the markets back and forth.

On Friday there is the Second Estimate GBP Q/Q out of Great Britain, and the Core CPI M/M out of Canada. Both of these could move the markets, but we get the feeling that most of the traders out there will be paying more attention to the Jackson Hole Symposium and its various speeches over the weekend. Typically, Jackson Hole has been an area where Ben Bernanke feels comfortable making analysis the check the markets. Whether or not he does this time might be a different story, but there is always that possibility. Because of that we expect a lot of profit taking towards the end of the day on Friday in order to avoid any surprises over the weekend.