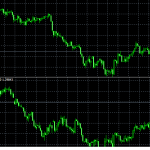 Crude oil is a very important component of the world economy and the financial markets.  Priced in US dollars, many countries of the world earn their money from exporting large amounts of it found within their territories. Crude oil is so important because of all the derivative products obtained from it, used in several industries such as road transport, aviation, power and the like.  The world would be a very different place without it, and the fact that countries have gone to war over it shows just how important it is.

Today, we will take a look at how crude oil, traded separately as a commodity instrument, can be used to trade the currency market in what we shall call the crude-currency interplay.

Of all the major currencies, only Canada can boast a significant share of it's revenue from crude oil and has been proven to have the second largest reserves in the world behind Saudi Arabia.  As one of the world's largest consumers of this commodity, the US imports most of its oil from its neighbour up north.  To set the records straight, the US do produce some crude oil but not in sufficient amounts to met its bludgeoning demand.  As a result  the shortfall must be bridged with imports of this product.  Japan do not have any crude oil reserves and depend wholly on imports of this product and its derivatives to keep its heavily industrialized economy going.

Naturally it follows that the currencies of these three countries are affected by changes in oil prices.   The most important correlation is that of the US Dollar with crude oil, with an inverse relationship existing between the two. When crude prices rise, the value of the USD falls and vice versa. This is why on some trading platforms, we see crude oil listed as Oil/USD.

Of these three currencies, the USD/CAD and CAD/JPY would ordinarily have been the best to use to trade this correlation. However, there are too many competing fundamental indicators on these 3 currencies, and so the EUR/USD has emerged as the current currency pair of choice to trade the oil correlation. This is because the Euro has little fundamental factors that may mask the impact of oil.  Indeed the most telling fundamental impact on the Euro has been from the sovereign debt crisis in some of the EU countries.  So when the price of crude oil is making a major push or a major pull-back, the EURUSD can be traded to follow this movement. See the example below:

The chart of the EUR/USD and crude oil (light sweet crude) have been placed alongside each other in order to show clearly that there is a positive correlation between oil and the EUR/USD (USD being the counter currency is in an inverse relationship). Since we can see the way the candlesticks on both charts are heavily correlated, it is very clear to see that trading the EUR/USD to follow the price pattern of oil is a very good way to profit from the market.

All the trader needs to do is to use the various technical entries that have been described on this site to make the appropriate trades.

Scammed? Where to Get Help