The Impact of Mergers and Acquisitions on Currencies 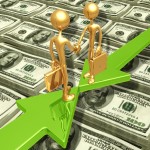 Mergers And Acquisitions Can Move the FX Markets

A strong equity market will see a significant amount of cash flow into the economy of that country. Equity holdings is all about buying shares or ownership of a company. The US markets are unique in that they allow listing of foreign companies as American Depository Receipts (ADR's)  or as full-blown American divisions of these foreign companies, listed autonomously.  When a country's equity market is strong, it attracts a lot of  inbound foreign capital.  This simply means that traders will have to sell their country's currencies to buy that of the country with the strong equity market, strengthening that particular country's currency.  The reverse is also the case. Weaker equity markets will lead to capital flight and investors will exchange the currency of the ailing country into their own currencies.

A classical demonstration of the inflow of foreign investment into a country that translates into acquisition of all or some of the stake in another company is the merger/acquisition.

Mergers and acquisitions are simply put, processes that lead to a combination of two or more companies to form a single entity (merger) or the purchase of some or all of the shareholding in another company by one company (acquisition). Payment for such deals are usually done in the following ways:

a) All stock deals
b) All cash deals
c) Varying combinations of stock and cash.

Payments that involve cash such as (b) and (c) above, have to be cross-border in nature and be significant enough to cause a change in the exchange rate of the two currencies involved. We are talking about a currency exchange of at least $1billion.

In 2000, Francesca Fornasari and Francis Breedon released a paper which highlighted their findings that the domestic currency of the target corporation appreciated by an average 1% over a 50 day period, with an eventual peak of 5%. In the Forex markets, a move of 1% is truly significant.

This view has been supported by UBS, citing Australia as an example.  Fuelled by a mining boom and surrounded by trade partners that emerged relatively unscathed from the global financial crisis of 2008, net inflows into Australia have risen from 10% in the 1990s to more than 25% in 2011, causing the AUD to rise by more than 75% since its lows of 2008.

Explanation: For such a deal to be paid for, Deutsch Telekom would have had to exchange billions of Euros for US Dollars. In the Forex market, when there is large supply of currency E and strong demand for currency U, market forces would imply that currency E would lose value and currency U would gain strength, which would explain the fall in the value of the EUR against the USD.

When US company Proctor and Gamble (P&G) acquired a 77% stake in Wella AG (a European company) for $4.5billion, the EURUSD gained 100 pips on the day the deal became public and eventually the move extended to 200 pips by the next week.

These two deals show the big moves that can occur following cross border M&As, but the trader will still need to use all the rules of trade entries and exits that we have been discussed in other lessons on this site to put these trades together.

Scammed? Where to Get Help