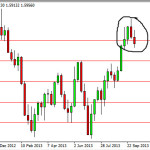 The last week in the Forex markets was a relatively quiet affair in most pairs, but as usual there were a few bumps here and there.  This is almost always the case, as the markets will go back and forth in it's interests. Lately, we have been focusing on the Federal Reserve, and whether or not they will be able to taper off of quantitative easing anytime soon. Truthfully, the real concerns of many of the FMOC members include employment almost exclusively. If the US employment markets don't perk up, the odds of tapering are almost nil. With the Non-Farm Payroll numbers still AWOL, it seems that the markets will simply have to “guess” as to what the labor market is like in America.

The truth is, it is almost impossible to imagine that the labor market in the US has gotten stronger. This being the case, it is very likely that the markets will continue to punish the US Dollar over the long term. Some of the currencies that the market has been attracted to in order to punish the USD include the Euro, Pound, and Aussie. However, there are possible cracks in the higher currencies as we could see a possible pullback in many of them.

GBP/USD Weekly looks ready to roll over for the time being.

The US Government almost looks ready to end the “shut down” that the budgetary discussions seem to bring. Because of that, the USD got a bit of boost on both Thursday and Friday. The stock markets also got a bit of a boost, and as a result some of the “riskier” pairs did well also. The CAD/JPY is one example, as the pair tends to follow the oil markets, and the Yen is certainly one of the most “safest” currencies out there. The pair has formed a nice hammer on the weekly chart, and looks poised to try and head to the 100 handle soon.

Going forward, we believe that simply waiting for the XXX/USD pairs to pull back, and then start to buy the other currencies, with the Kiwi and Aussie being interesting. The Pound will also be good as well – but for the time being, it looks like the Dollar might get a bit of a reprieve.

Chinese CPI y/y comes out. Chinese numbers like this will be very influential to “risk”, to be shown in the AUD and NZD.

Australian Monetary Policy Meeting Minutes. This can move the markets, but only if there is a hint of action down the road.

The UK releases CPI y/y and PPI m/m during the session, and this will have a great effect on the Pound, especially in the GBP/USD pair.

New Zealand releases CPI q/q, watch the NZD/USD pair on this one.

The UK releases Claimant Count Change and the Unemployment Rate. Another mover of the Pound potentially.

The Chinese release GDP numbers on Thursday, and this could move all risk assets.

The Canadians release Core CPI m/m, which can move the USD/CAD pair.