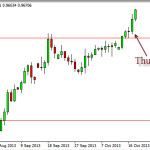 The past week in the Forex markets saw a significant break in the value of the US Dollar.  FMOC member Mr. Evans stated that he believes the Federal Reserve needs to see several months' worth of data before deciding on whether or not to taper off of quantitative easing, most specifically the bond buyback program in the US. This is of course a very bearish sign for the Dollar, and as a result the Greenback was punished against several currencies after this statement was made on Thursday. After all, he IS a voting member, and that means something. It is unlikely that he said this without the clearance of Ben Bernanke, and as a result the markets are trying to price in the Fed tapering in 2014, not 2013.

The markets did slow down a bit on Friday, so therefore the Dollar did get a bit of a reprieve, but we have a hard time thinking that the USD will fare well over the next few months. One of the most obvious places that we see the USD getting beat up is against the Aussie Dollar. In this market, we have cleared 0.95, a major resistance area, and now look ready to try and get to the parity level. This is going to coincide with higher gold prices, and quite frankly has almost nothing to do with Australian economic conditions, and everything to do with quantitative easing out of America.

The Dollar also got a bit of a beat down against the Pound and Euro, but both of those currencies pulled back a little bit late on Friday. Because of this, we have a shooting star, which is generally bearish. However, we recognize that the markets are simply trying to take a breather at this point, and believe that this potential pull back will be a buying opportunity going forward. That being said, you can see on the charts where we are looking to buy, as denoted by the yellow highlighting.

The gold markets also got a boost on Thursday, but as you can see remain somewhat trapped at the moment. However, the markets should eventually go higher, and therefore start looking at the $1350 barrier as the next potential target. We are buying short-term pullbacks in order to take advantage of potential under pricing.

The overall outlook for the Dollar in our opinion is going to be soft overall between now and New Year's Day. This should allow plenty of opportunities in the EUR/USD, GBP/USD, AUD/USD, and NZD/USD – all to the long side. The markets may have finally found a way to trend for some time now. That will be welcome news by the trading community on the whole.