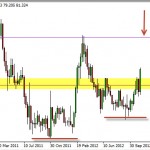 On Friday, we saw a news conference that various congressional leaders gave in the United States suggesting that perhaps there was some type of hope for a bipartisan agreement after all. The fiscal cliff discussions have been one of the most widely followed issues in the United States recently, and as a result a lot […]