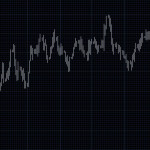 Looking at the upcoming week, it doesn't take much to imagine that there will be some volatility. After all, we've seen the markets move quite rapidly in both directions, as we go from a “risk on” to a “risk off” type of environment. One of the biggest problems that we have going right now as that we are currently looking at a race to the bottom as far as currencies go. The Europeans, Japanese, and Americans are all trying to devalue their currency a one time, and this of course causes extreme volatility in the currency markets.

The real question is whether or not there will be any “winners.” After all, this so-called “currency war” will only end in tears for someone. The other thing to keep in mind is that when everyone is looking to do the same thing, we can have a washout when it comes to effectiveness. After all, currency traders will be looking to that money somewhere. If you have a situation where the Europeans are looking to devalue their currency, the smartest thing you can do is look to buy another currency while selling the Euro. One glaring example of this was shown this past week as the Swedish central bank stated that they were fine with a strong currency, and actually preferred it. Because of this, you can see that the EUR/SEK absolutely plummeted during the week, breaking below the long-standing 8.5 support level.

Looking around the Forex markets, it becomes a game of figure out who can stand stronger currencies at this point. Another central bank that has suggested that a stronger currency was an issue can be found in New Zealand, and you can see that the New Zealand dollar did attempt a serious breakout against the US dollar earlier this week. However, the Friday session solid turnaround and now we are at a point where we have to decide whether we are going higher or not. If we can get a daily close above the 0.85 level, this would be very bullish of this market and could lead as high as 0.95 before it's all said and done.

In the upcoming week, we have several different things that can rock the markets. We still believe there is more volatility to come, and as a result we will be watching the German ZEW announcement on Tuesday, as it will give us a nice picture of what economic sentiment in that country is like. Remember, as Germany goes, so does Europe. Other things the lookout for will be the Italian elections, which of course can cause absolute havoc in the currency markets if the wrong person wins…..Berlusconi that is.

The Bank of England has its minutes released on Wednesday, and this of course can be vital as the British pound has been absolutely pummeled lately. This could cause a bit of a bounce, but the GBP/USD looks like it's definitely heading lower over the longer term. We expect to see 1.50 print before it's all said and done. Speaking of minutes, which not forget that the Federal Reserve releases its minutes on Wednesday as well. In fact, we believe Wednesday has the potential to be one of the most volatile trading days of the week, which should be very volatile overall. By all means, pay attention to these minutes that are coming out, and without a doubt any signs of spikes in Italian bonds.