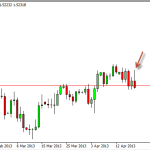 It's all about the Yen…..again.

Forex markets had a very volatile week once again, but by the time we finished on Friday we had some clarity in at least the Yen pairs. This is mainly because of the G20 statement that suggested the Japanese were doing the right thing by aggressively easing their monetary policy, which allows the markets to feel comfortable with the idea of Yen depreciation. In other words, they were given the “green light” that means other central banks will not be getting involved. With that being said, the Yen should finally got a clear path to continue much, much higher.  This is especially true when we saw the close on Friday as the USD/JPY pair was trading at roughly 99.50, and heading towards the 100 handle.  The reality at least for now is that we saw the Yen lose massive ground against the Euro, the Down, and just about everything else out there. This should continue to be the way the markets trade for several months, if not longer.

USD/JPY Weekly chart. You can see that we ended up with a bullish candle after initially falling.

What will be truly interesting is how the markets react to the statement. After all, it was late on Friday when the statement came out when the Asian and European players will not have had much in the way of a reaction yet.

Fitch downgraded the UK from “AAA” to AA+” on Friday as well, but did so late in the session. So like the G 20 statement, there was only a limited amount of participants in the market when this news hit the markets. The GBP/USD pair fell, but closed sitting just above the 1.52 level. We see this as the last bit of support from the 1.5250 level, and we should see more weakness as the Europeans and Asians adjust to this new bit of information. On this evidence, it appears that the Pound has ran it's course for the time being.

On Tuesday, we have the RBNZ giving a monetary policy statement in Wellington. The New Zealand economy has been doing fairly well, and there is talk of a potentially overheated housing market. This has lead some members to suggest that higher rates may be in order. However, this isn't expected to happen right away, but the wording of this statement will be scrutinised heavily to say the least.

On Thursday, the Bank of Japan has another monetary policy statement. This isn't expected to be earth-shattering, but rather a restatement of the BoJ's determination to weaken the Yen over time. Because of this, we don't expect much of a reaction right away, but do think this will reinforce the will of the market to buy the XXX/JPY pairs.

Finally, on Friday we have US Advance GDP q/q. This will be important because the markets are essentially expecting the US to keep things afloat for those that want to buy risk assets, and any weakness will be important to note, and what the market thinks that the Federal Reserve will do in reaction.