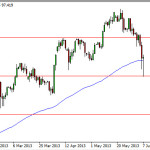 Non-Farm Payroll for May

The non-farm payroll number came out on Friday, and essentially was right in the middle of all estimates. The United States added 175,000 jobs during the month of May, and of course this was basically in line with the anticipated 167,000 jobs.  When you factor in the revisions downward for the last couple of months, it was essentially right about where we expected. Because of this, there was a little bit of a “reprieve” for the US dollar that had traders buying it. It's now apparent that there was a bit of a “fear trade” put on during the Wednesday session.

The Japanese Yen
All this led to the USD/JPY pair producing a wicked looking hammer. This hammer suggests that the 95 level is now the “bottom” of this market, which of course makes sense as the Bank of Japan suggested it was the lowest level that they felt comfortable with this market being. On Friday, we sell this market touched the 95 level, and rocket straight back up. That being the case, this looks more like a “brick wall” then some type of support zone. We will be interested in buying this market on dips going forward, and perhaps a break of the highs from the Friday session as buying a break of the top of the hammer is a classic technical analysis move.

Also of interest is the fact that the 100 day exponential moving averages just below where the market closed on Friday, and as a result it looks like we have several reasons to believe that this market will continue higher. It will be very important to pay attention to how Japan acts on Monday morning, but we believe that if there is a positive move in the Nikkei, this market should continue much higher. We suspect that the 100 level should be targeted right away.

The EUR/USD pair had an interesting week as well, as we broke out above the 1.32 level. Now that we have done this, the question then becomes whether or not the 1.32 level can offer support. The market on Friday showed that it did in fact offer that support, but the problem is that we formed a shooting star. The shooting star suggests that we are going to go lower, but there is significant noise just below that keeps us way from shorting this market right away. Essentially, we feel that we are in a consolidative area that needs to be broken in one direction or the other in order to continue. As you can see on the chart, there is a yellow square, and we will be taking the trade in the direction of the next move outside of the box. If we fall, we suspect that this market would simply be reentering the previous consolidation area. On the other hand, breakout to the upside since his pair to the 1.35 area.

Of particular interest this coming week will be the Bank of Japan press conference on Tuesday morning, which of course will be parsed to find out whether or not there is going to be additional pressure put on the markets by the Bank of Japan in order to weaken the Yen. While we obviously don't expect any type of policy action, certainly jawboning the market could have an effect. Also on board, the RBNZ has a monetary policy statement on Wednesday as well, and of course the markets don't expect any type of rate cut but there's always the possibility that the authorities say something to drive the value of the Kiwi down even farther.

Retail sales comes out of the United States on Thursday, and that of course will make quite a bit of difference as to what the Forex markets think about the strength of the American economy. Although is not necessarily a major announcement, it could affect the way the stock markets behave for a day or two, which of course will affect the flow of money. So far, we essentially expect US dollar strength over the week, but weak economic numbers like this can certainly put a dent in that type of bullishness. On top of that, on Friday we have the PPI number coming out of the US, as well as the University of Michigan Consumer Sentiment. Both of those numbers could move the markets as well.