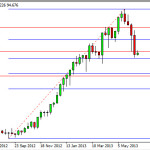 The Forex markets have been very volatile again as the jitters over whether or not the Federal Reserve is going to cut back on quantitative easing continues to make traders very hesitant to hang onto a trade any longer than a few hours. With that being said, the one pair that truly has shown this is the USD/JPY. This pair has fell rather significantly over the last couple weeks, and we are now testing the 95 area for support. in fact, we have tested as low as 94, and at that point in time as you can see on the weekly chart, there is a significant amount of support. This is also backed by the idea that the 38.2% Fibonacci retracement is at that level as well. As a result, it is very likely that this market will find buyers in this general vicinity.

Going forward, we believe that the FMOC meeting on Wednesday will be vital as to the future direction of this pair. The meeting has a question and answer part after the statement, and as a result we think that the world will be watching very intently what Mr. Bernanke has to say. If he suggests that tapering is still a possibility as far as quantitative easing is concerned, the value of the US dollar should gain rather significantly, and this will be especially true in this market as the Bank of Japan is trying so hard to weaken the Yen. Because of this, we believe that this pair will become very volatile during the second half of the week.

The antipodean currencies continue to look very weak overall, as the commodity markets have been thoroughly beaten. The Australian dollar has probably been more widely reported as far as its weakness is concerned, but the New Zealand dollar looks just as weak at the moment. Both of these currencies are greatly affected by commodities, although rather conveniently they tend to lie on the opposite ends of the spectrum. The Australian dollar tends to follow the so-called “hard commodities”, while the New Zealand dollar tends to follow the “soft commodities.” This of course has a lot to do with what they export, and the fact that the Australians since so much of the raw materials to China that the Chinese firms use to build the massive construction projects they are so well known for, the Australians are essentially highly leveraged to the Chinese economy. Unfortunately for Australia, the Chinese economic numbers haven't exactly been stellar lately. Because of this, you can see what's happened to the Aussie dollar in the chart below. We expect more of the same, and a move below the 0.94 handle should send this down to 0.90 by the time the move is all said and done. While the Aussie dollar did have a positive week, it should be noted that we have seen weakness right away at the open on Monday. Also, after a significant fall like we have seen, it makes sense to get a little bit of a bounce.

A few things to watch for…

All things being equal, we fully expect to see the most significant move of the week based upon the FMOC meeting. Because of this, it is very possible that the first couple of days this week will be relatively quiet. Nonetheless, we also have to keep in mind that the G-8 meeting is going on as well. While not a lot is expected out of that meeting, there is always the potential for headline noise.

On Wednesday, we also have Gov. King from the Bank of England speaking, as well as Gov. Poloz from the Bank of Canada. Both of those speakers of course could move the markets, especially in Britain where the Pound has enjoyed such a massive resurgence. Adding potential volatility to the Australian dollar is the HSBC Flash Manufacturing PMI numbers coming out on Wednesday as well.

Buckle up, it's going to be a wild week.