This week in Forex July 1st – Why The Yen is Like A Hot Dog. 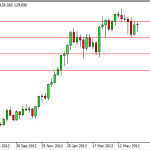 This past week the markets saw a lot of back and forth movement, finally making its mind up and handing us a continuation of the weakness in the XXX/JPY pairs across the board. Many of the weekly charts look very negative for the Yen, which of course will have no complaints out of Tokyo. Going forward, it appears that if we can get above the 130 level in the EUR/JPY pair, and the 100 level in the USD/JPY pair, we could see a continuation of what's been one of the easiest and best trades in the Forex markets.

Another possible surprise trade coming up this week is silver, as it appears to be finding a bit of a base near the $18.00 handle. This was a long-term supportive area that acted as expected, sending the market much higher. The resulting hammer on the weekly chart suggests that silver should see at least a short-term bounce, and could begin the bottoming process. After all, at the very lows, silver was down roughly 40% for the year! Markets simply do not fall like that forever, and will eventually find people looking for value – buyers.

This coming week is full of economic news.

This coming week, there will be certain things to pay attention to that will more than likely move the markets. Without a doubt, the Sunday/Monday morning session has the Chinese Manufacturing PMI numbers, which of course could really move Asian currencies. The USD/JPY pair will be affected greatly, as the Yen is often traded as a proxy on the mainland. Also, the AUD/USD pair should move based upon that as well. Roughly 12 hours later, Great Britain will release the same number, which could move the GBP/USD pair.

The Reserve Bank of Australia announces its interest rate statement on Tuesday, affecting the Australian dollar. Later that same day, the Aussies also release the retail sales number, and the trade balance number. Because of the Chinese and Australian numbers, we expect to see the Australian dollar move around quite a bit over the course of the next week.

The Americans release the ADP Non-Farm employment change numbers on Wednesday as usual, along with Trade Balance numbers and Unemployment Claims, as well as the ISM Non-Manufacturing PMI number. Needless to say, Wednesday could be a crazy session for the Forex markets. This is followed by the Bank of England releasing its interest rate decision on Thursday, but more importantly the MPC Rate Statement as well as the ECB releasing the interest rate decision for Europe as well.

This coming week should have plenty of action for Forex traders, and that's going to be seen on Friday as well, as it is the granddaddy of them all, the Non-Farm Payroll numbers out of America. Of particular interest will be the USD/CAD pair, as the Canadians will be announcing their employment numbers at the exact same time as well.

Fasten your seatbelts and enjoy the ride.