Market Moving Events for the Week of November 26th 2012 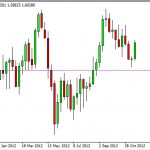 Over the past week, we have seen economic numbers coming out of Europe that are slightly better than anticipated. We have had French/Manufacturing PMI come out better than expected, the German ISO business climate numbers come out much better than expected, as well as many supportive comments coming out of the EU economic summit. Because of this, we have seen a bit of a resurgence for the Euro over the previous five sessions.

Looking at the EUR/USD pair, you can see that it has exploded to the upside over the previous week. We now seem destined to test the 1.3150 level for resistance, which of course is the top of the most recent consolidation zone. Looking at this chart, it appears that we will struggle to get over that level, although we could reach it relatively soon. We are entering the month of December soon, and this of course will see volumes dry up the later we get into the month.

In a low liquidity environment like that, we can see sudden moves and support resistance levels give way rapidly. However, the resistance that we see from the previous descending triangle on the weekly chart suggests that there is a taunt of resistance above the 1.3150 level, and by extension we do not expect it to be broken. In fact, we expect a surge, and then a pullback in this pair as worries about European issues come back into the fray.

Looking forward, we see the upcoming week as a plethora of solid announcements. The United Kingdom will announce revised GDP quarter over quarter on Tuesday, which could be a big mover for the British pound. Currently, the GBP/USD pair looks very strong, and we could see an acceleration of the uptrend if the numbers are positive enough. Right now, we see significant support at the 1.58 handle in that currency pair.

Another interesting announcement will be the new home sales out of the United States. There is a consensus that the housing market in the United States is finally starting to make a turnaround, and this of course will be paid attention to because of that. Expect that at 10 AM Eastern standard time on Wednesday. Before that however, we will have the Core Durable Goods Orders number out of United States, which of course will move the markets as well. There are plenty of other minor announcements, but we have the preliminary GDP quarter over quarter coming out on Thursday at 8:30 AM Eastern standard time for the United States that will certainly be another market mover.

Rounding out the week will be the Canadian GDP month over month on Friday at 8:30 AM Eastern standard time. There is a potential market moving event late on Friday in the form of the Manufacturing PMI out of China, but the markets will obviously be closed before that happens. This of course could really get things moving during the early hours of the following week.