Holiday Trading in the Forex Markets December 24th 2012 and Beyond 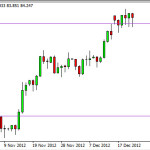 One of the most difficult weeks to trade Forex is the week of Christmas. This is because most of the professional traders out there simply will not be at work, so the liquidity gets to be very thin. Generally, this extends all the way to about the end of the first week of January, when the so-called “big dogs” come back into the marketplace.  This is a bit of a mixed blessing this time of year, as the illiquid markets can make for massive moves in one direction or the other, as traders square up their positions before the end of the year.

For this reason, there is a great danger in being in the marketplace currently.  This doesn't mean that it's impossible oh, far from it.  In fact, some the largest gains can be had this time of year if you are not only lucky enough, but careful enough.

For example, looking at the EUR/USD pair, you can see that the weekly chart formed a massive shooting star. This shooting star presently sits just above the 1.3150 support level, so while a lot of traders may be interested in shorting this pair, there is also the possibility that that support holds. Assuming that support holds, we could lock it through the top of that shooting star which of course is a massively bullish sign.  However, we have a couple of specific levels that we are paying attention to when it comes to trading this pair: the 1.31 handle is the bottom of the support “zone” as far as we can tell. If we can get below that level, we think this pair will trade down to the 1.29 level. Alternately, breaking the top of the shooting star's range at the 1.33 level would be a very bullish sign and have us chasing the 1.35 handle in relatively short order.

I think that the biggest driver of Forex markets will still continue to be the so-called “fiscal cliff” talks. At the end of the week, Congress and the President still were not able to come to an agreement, and this will put a bit of a weight upon risk assets in the short-term. However, once the Americans come together with some type of agreement it's very likely that we will see a big “risk on” rally.

The other pair that has caught our attention lately is the USD/JPY pair. This pair has finally broken out above the 84 handle, and looks ready to continue much higher. While on the weekly chart it looks somewhat neutral at the moment, the fact is that we have formed several hammers in a row on the daily chart. This does in fact look like a pair that ready to take off.

We have been thinking that this pair will be one of the better trades for the year 2013, and now that we are above the 84 handle we think that's even more so the fact. With that being said, we think that the US Dollar will continue to gain on the Yen for the foreseeable future because of the massive amount of monetary easing the Bank of Japan is about to begin.  Although the Federal Reserve is buying assets left and right as well, we are starting to see bond yields in the United States rise slightly, giving added juice to the Dollar against the Yen.

With all this being said, we believe that the charts are starting to tip their hand as to what they're getting ready to do for next year. The next couple of sessions will be very hard to garner some type of serious meaning out of, mainly because of the lack of volume. However, we could see serious moves in January, and it looks like were already leaning in a couple of obvious directions.