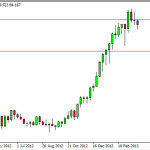 The Forex world will have a lot of headlines during the upcoming week as there are several announcements that can move the markets. The week is a bit back loaded though, as the central banks out of Japan, Europe, and the UK all have statements on Thursday. The Friday session of course has the granddaddy of them all, the US Non-Farm Payroll report. We think this NFP Friday won't be as monumental as some of the other ones, as the Federal Reserve has made it abundantly clear they are continuing the easing policies for the foreseeable future.

The Japanese announcement will be particularly interesting, as this could be the meeting where they finally announce just how far they are willing to go in order to cap the value of the Yen. We already have had statements out of some officials that the 95 – 100 range against the Dollar is acceptable for the time being. This is probably just the first leg higher in the USD/JPY pair though, as we still think that this market is in the beginning of a multi-year uptrend. With this in mind, any sell off after the announcement will more than likely only offer a buying opportunity.

As you can see, the Yen has been pounded week after week, and should continue to be. If we do get a pullback, the 90 handle looks like a spot that we would more than likely see a lot of support. Also, by that time we would have to start thinking about a potential currency intervention by the Bank of Japan.

The European Central Bank will also be one to watch. The Euro has recently been hit hard, as the debacle in Cyprus really fueled the selling of it. The idea that depositors would be used to bailout a bank rattled the markets, and now there is a serious fear that this could be the way forward for many of the weaker peripheral countries. There are plenty of banks in trouble throughout Italy, Ireland, Spain, Portugal, and Greece. The markets will be watching for new statements, and what Draghi has to say about the banks as a whole, as the markets lost a lot of confidence in them this past week.

Finally, it should be noted that the US Dollar Index managed to break out and above the 83 level this past week. For our money, this breakout should have the Dollar remaining strong over the longer-term, and as long as the Europeans keep showing a lack of fundamental understanding of the markets, it will remain strong.