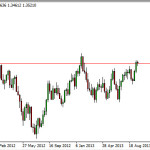 The Forex markets were again somewhat benign when it came to direction over the last week, and was especially true in the EUR/USD pair. The market simply seems ready to sit at the 1.35 level, an area that has been attractive to traders time and time again. This “market memory” seems to be pretty well entrenched, hence we think it is going to take real momentum (of the superhero kind) to break in either direction with any strength. The 1.34 level in the EUR/USD pair is supportive as well, so it is almost as if the pair can't really be traded for anything more than a quick scalp here and there.

The markets acted very much the same around the horn as it were, probably in response to the idea that the Federal Reserve chose not to taper. Originally, it was Dollar-negative, but now people are starting to wonder whether or not the economic condition of the world isn't in poor shape, which normally drives up demand for the US Dollar. To say it is confusing isn't exactly a stretch at the moment. Because of this, we feel that the markets are going to be very short-term friendly over the next several months.

The commodity markets are showing us much the same as well. For example, the Light Sweet Crude markets suggest that we are going to remain in the same basic area that we had been in over the summer. The Canadian Dollar is obviously influenced by this, so we can translate it to the USD/CAD pair as well. It is probably going to drop, but we aren't necessarily looking for any fireworks at this point.

The markets will more than likely be calm because of all of the conflicting issues out there, and the real lack of clarity. Participants in this market will struggle for clear direction for any real length of time for the next several months, and because of this we are focusing on the hourly charts now, something we typically do not do. However, as prudent traders we will keep an eye on longer-term charts for any potential moves that can be held onto to.

Canada – GDP numbers come out on Monday, and will certainly have an effect on the Loonie, but one has to wonder if it will be enough to get the currency to move for the longer-term? We doubt it.

Australia – Interest rate announcement on Tuesday will certainly be paid attention to, but the announcement itself won't be the complete focus, it will be the statement and any hints as to what the bank is projecting.

Europe – The ECB has a minimum bid rate on Wednesday, but don't expect too much out of it.

USA – The Non-Farm Payroll number comes out on Friday. Short-term trading is possible, but a real move isn't likely.