The Forex week of September 2nd – More Up and Downs 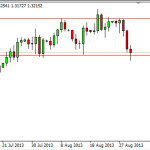 The Forex markets produced a couple of interesting candles last week, so we might have a couple of reasonable set ups in the short-term. The markets will watching the Federal Reserve like a hawk for any hint that tapering of quantitative easing during the month of September or October will happen.

Unfortunately, that answer won't be clear this coming week, so it will be somewhat of a choppy market still. With that being said, we are looking for more consolidation over the next week, and there are a few opportunities out there.

You can see how the EUR/USD pair has found support at the bottom of the recent consolidation area. It should be pointed out that the 1.32 level is important on a longer-term basis as well, and because of this we believe that a break of the top of the hammer that formed on Friday should simply continue the overall sideways action – giving us a real chance to hit the 1.34 area again as the markets are simply waiting on the Fed.

On top of that, there is an excellent set up that has shown itself in the USD/JPY pair. This pair will be especially sensitive to what the Federal Reserve decides, and we believe that if the Fed does in fact taper off  QE – this pair will go through the roof. It appears that there are others out there that think this as well – the weekly chart produced a bullish hammer after all.

The Monday session in Labor Day in the USA, so expect no real action during their session.

The RBA has an interest rate decision on Tuesday, and this could  move the AUD/USD pair. However, no change is expected, but as usual traders will be picking apart the statement for clues as to the future moves of the central bank.

The US Non-Farm Payroll numbers are due on Friday – a number which always seems to move the markets.