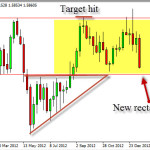 The past week in Forex was an interesting one, featuring a lot of moving parts as usual. The Japanese Yen continued to get pummeled, and the Pound joined the ranks of walking dead towards the end of the week.  In fact, the GBP/USD pair is looking very interesting after a serious fall on Friday, as we are approaching a very important support level in the form of 1.58 – the site of the breakout this past summer.

Looking at the chart, you can see that the ascending triangle was broken during the summer, and the measured move was to be 1.63 based on the height of the consolidation pattern. However, since then we have seen a steady erosion of the Pound. The real question is whether or not we are going to completely fall apart, or are we going into some kind of consolidation patter for the long-term? If so, we could see a prolonged fight between 1.58 and 1.63 as traders go back and forth.

With this being said, it is obvious that the next week or two could be very important for the GBP/USD pair. If we break below the 1.58 level, with all of the “noise” back at the triangle, it is difficult to think that the market will fall straight down.

The AUD/USD pair continues to confound most traders. Typically, the pair will move higher with good economic news out of China, but hasn't recently. One has to wonder whether or not the sentiment expressed by Citi over the past week isn't catching on around the financial world: The Chinese numbers seem to be “too good to be true.” If that's the case, it could explain why Australia, the “general store” for the Chinese economy, has seen a decline in employment while the Chinese economy continues to look solid. Also, there are concerns that the numbers aren't matching up with the import numbers of many countries. I am sure this isn't the last we will hear of this, but it is hard not to think that someday the jig will be up. Until then, the world's markets tend to take the numbers at face value. All of them except the AUD/USD it seems. The 1.06 resistance barrier still  can't be broken. If it happens though, look for a move to 1.10 as based upon the “height” of the rectangle it is currently in.

As for next week, we expect to see a general expectation of positive action, and as a result several currencies should do well. The Euro continues to gain, and it is very likely this pattern will continue. The Bank of Japan has a press conference on Tuesday that will be massive in its implications. The market has priced in a massive expansion of quantitative easing out of Tokyo, and any disappointment could send several pairs such as the USD/JPY, EUR/JPY, GBP/JPY and CAD/JPY all lower. However, if it does, there is a high likelihood that the pull-back will only be a buying opportunity.

It will be interesting to see what the Bank of Canada says on Wednesday, as the Loonie (USD/CAD) is simply sitting still at the moment. Look for any mentions of the US economy, as that will drive the value of the CAD more than anything else save oil. Speaking of oil, the Light Sweet Crude market looks like it is breaking out, and this could push the USD/CAD lower. A break below 0.98 would be very bearish.

The ECB and Bank of England have statements as well. Expect quite a bit of volatility over the week, and make sure to keep your stop losses handy.