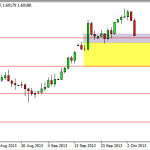 The Forex markets this past week behaved erratically to say the least, because as per usual we would gotten the quiet trading in the middle of the week out of the way before a nonfarm payroll Friday announcement.  However, since the US government is still in shutdown mode, there was no actual announcement.  For this reason, the reaction in the Forex markets was almost nonexistent on Friday, handing the US dollar a little bit of a reprieve since no news was interpreted as no  negative news. Sooner or later however,  Congress will get it together and form the government again (we hope :-)).  When they do, expect a whole slew of economic announcements to come out at once.

With all that being said, there are several different currency pairs that we are watching right now. One of the most interesting one is the cable, which shows the British pound just above the 1.60 handle, an area that we suspect will be massively supportive. We are concerned, a little bit when you look at the fact that the market close is at the very bottom of the range for the session on Friday. With that being the case, we are simply sitting on the sidelines and waiting for some type of supportive reaction, either at the 1.60 level, or all the way down to the 1.5750 level, which is also massively supportive. Somewhere in that range, we fully expect to see the British pound receive a bid.

Another market that we have our eyes on too is the USD/JPY pair.  This market actually broke down below a larger wedge formation, but still looks confused at the moment.  When we think about the fundamentals, it does make a bit of sense as the Bank of Japan is working feverishly against the value of the Yen. On top of that, the Federal Reserve is being scrutinized as to whether or not they taper quantitative easing.  Because of that, the breakdown of the wedge formation isn't as cut and dry as we once would've thought. Quite frankly, we believe that ultimately this pair will go higher but we really don't know when. It's all a matter of timing now. As soon as the Federal Reserve feels that they can switch off quantitative easing, this will be the pair to start buying hand over fist.

One thing that the Forex market needs right now is clarity. We simply do not have it, and quite frankly haven't had it for years now. There seems to be a lot of “market memory” when it comes to the financial meltdown five years ago, quite rightly there is a lot of skittishness. You should also be aware the fact that algorithmic trading is starting to make its presence felt in the Forex markets as well, which changes a lot of things too. Nonetheless, what we would suggest is that the trader should not get too hung up on the idea of trading only the major pairs. There are plenty of minor and exotic pairs out there that trend quite nicely, and those are the pairs that you need to be paying attention to these days, as they tend to be much more one-sided, something that a Forex trader loves. One such example is the EUR/CAD:

By far, the most important thing coming in the first part of the week is the FMOC Meeting Minutes on Wednesday. The markets are concerned about what the Fed can or cannot do, and this could supply a bit more information for that decision.
However, be aware that the ECB President Mario Draghi speaks at Harvard later that day, and when this happens inevitably questions will be asked that could give a hint or two as to what he is thinking about interest rates. The Aussies also have employment numbers that night.

The British will have an interest rate announcement on Thurs, which is always going to move the markets. Don't look for anything to change, but the statement itself will be picked to pieces – like the remains of my KFC here.

On Saturday, there is the Chinese Trade Balance numbers, which is a decent indicator of global trade.