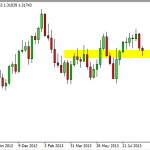 This past week was one of the more important ones that we've seen in the Forex markets for a while.  This is because of the nonfarm payroll number, which  is the last number of any significance before the Federal Reserve makes its decision on whether they will gradually switch off the quantitative easing tap.  Against this backdrop the US employment number was somewhat disappointing, which is causing a lot of traders out to question whether or not the Federal Reserve will be able to press ahead with its decision to taper off. This obviously throws a spanner in the works where confidence is concerned in the marketplace, and subsequently is causing a lot of volatility along with dare I say sleepless nights.

In fact, one of the main currency pairs to follow when trying to track down expectations for the Federal Reserve is the EUR/USD pair, which turned out to be well supported. As you can see on the chart below, the weekly candle is a hammer, right about where you would expect to see support. Because of this, we feel that this market is probably guessing that the Federal Reserve is not going to taper, and that the Euro will be the beneficiary, at least in the short term.

However, we obviously don't know exactly what the Fed will do, and with that being the case you can expect a lot of volatility. A lot of the traders that push the market are coming back from summer holiday, so liquidity should start to pick up quite a bit. This of course should help markets overall, but keep in mind that there is still quite a bit of uncertainty. For this reason, options markets might be where a lot of traders will express their opinion.

One of the most obvious places to see the uncertainty in the markets overall is the gold market. On the weekly chart below, we have seen a shooting star followed by a hammer. This suggests a lot of confusion, and because of the “anti-dollar” sentiment that is of this market, it shows exactly how indecisive participants are right now. Without a doubt, the Federal Reserve simply must speak and make its intentions known before we could have any serious follow through.

There are a few events worth watching this week that could produce some reaction. Trade balance numbers come out of China on Sunday, while building permits come out of Canada on Monday. UK employment numbers are due on Wednesday, along with the Aussie ones. Also on Wednesday is the RBNZ and its interest rate announcement from Wellington. Finally, Friday sees the Americans releasing Core Retail Sales, PPI, and the michigan Consumer Sentiment numbers.   Exciting times!