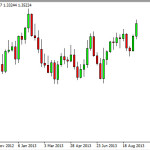 The Forex markets had an interesting five sessions over the past week, as the Federal Reserve finally acknowledged that it was not going to taper off quantitative easing.  As a result, we saw the US dollar get pummeled in the middle of the week.  Interestingly it has had a little bit of a reprieve, mainly because people have started asking questions as to whether there is going to be any real economic growth out there or not.

That being the case, we feel that this market is going to continue to be very volatile, and unfortunately the clarity hasn't really produced any real clarity!  Based on that we now we have to watch out for economic numbers and see whether or not there's any type of growth, which surprised us a bit. After all, the markets have been focused singularly on what the Federal Reserve was doing for some time now with the answers to the questions  no clearer than when they were first asked. With this in mind, we will have to watch several different pairs to get a handle on what is going on.

As usual, the EUR/USD pair was where you saw most of the action, as most traders will go there first. After all the Euro is the “anti-dollar” currency out there, which  gained once the Federal Reserve showed its cards. That being the case, looking at the chart you can see that we had a pretty strong move to the upside, but we still remain just above the 1.35 level.

You can also see that the Dollar took it on the chin against several other currencies, but what's even more revealing is that the commodity currencies bounced back and showed signs of the dollar strengthening in the end. One such currency pair would be the USD/CAD pair, as you can see forming a nice looking hammer for the week.  It's likely on this behaviour we may have more volatility to go, and quite frankly we think short-term trading is going to continue to be the norm.

The overall action we have seen is leading us to feel that short-term traders will continue to run the market, and that there is no real clear direction at this point. We do however think that the Euro will eventually go to the 1.40 level, but it is going to be very bumpy ride. Perhaps one way to play that particular currency pair is to buy long-term calls. After all, you cannot forget that there is an options market out there that makes this a much less dangerous situation. That being said, we feel that this market should continue to be interesting if nothing else.