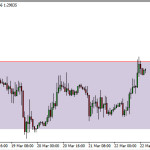 The Forex markets spent most of the previous week dealing with the fears of a Cypriot banking implosion. The week saw several attempts at fixing the situation, and headlines pushed the markets back and forth. Nowhere was this more obvious than in the EUR/USD pair. The 1.30 level has acted like a magnet, and as a result the Euro shot up towards it. One of the things to keep in mind is that the Cypriot Parliament has voted in several measures after the markets closed on Friday that are essentially pro-EU/IMF bailout, and it appears that they are making serious progress towards going in that direction which should  be a positive for the Euro.

Looking at the chart below, you can see the choppy action during the past week:

However, the one thing that we would mention is that any gap higher on Monday will more than likely be somewhat short-lived. After all, the Italians haven't made any headway towards a governing coalition, and as a result we should see further elections. Because of this, we think that this week will continue to be choppy in the EUR/USD.

The GBP/USD pair has also had a bit of a move this past week as well. The pair has been absolutely pummeled over the last several weeks, and as a result it has been one of the favored plays by traders. However, the pair reversed the bearish momentum over the last week to close at a vital area, and filled the gap. Looking at this pair, there was a shooting star that started the gap lower, and if we can get above that – we should see more upward momentum. In the end though, the downward pressure should reappear, but the bounce is long overdue. We suspect that rallies will be capped at the 1.55 level.

Another market to pay attention to is the gold market. The market has finally found a way to get above the $1,600 level, and this could be a sign of things to come. It really comes down to your time horizon, but the reality is that the central banks around the world continue to print mass amounts of currency. The gold markets are vastly different depending on what currency you are measuring against. For example, the gold markets are just below all-time highs against the Yen. However, looking at the futures market, you can see the metal is trading at $1,600 per ounce. The first chart shows XAU/JPY, and the second shows XAU/USD:

Looking forward, it will be important to see the reaction to the news over the weekend in Cyprus. The markets could see a “risk relief rally” due to the news, but the choppiness should continue overall. The Aussie looks good though, as the gold and the AUD/USD has broken out, continuing the classic correlation between the Aussie and the yellow metal: