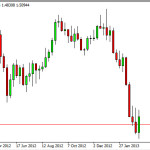 The Forex markets had a wild time as the Dollar continued to climb in value for most of the week. This trend was however broken towards the end the of week. During the session on Friday, we saw yet another reversal towards the end of the day. The most volatile pair was the GBP/USD pair, as it shot straight up during the Thursday session, only to turn back around on Friday. Talk about craziness!

Take a look at the daily GBP/USD chart, and then the weekly one. As you can see, this “pop” on Thursday wasn't that big of a deal in the big picture.

As you can see, the trend is most certainly still down. The 1.53 level looks like a good point to be concerned, but until then, we think this pair could go as low as 1.45 or so, with the 1.48 level being supportive as well.

Manufacturing Production in the UK

Manufacturing Production in the UK came in a -1.5% for the month of February, much less than the 0.0% reading expected. The number shows that the UK economy continues to weaken, and that the Bank of England will more than likely be forced to loosen monetary policy in the future – even if they don't want to admit it.

The University of Michigan Consumer Sentiment rating came in at 71.8 on Friday, much lower than the expected 78.2 level. The less than expected reading gave the markets a bit of concern on Friday as one of the bigger drivers of the US economy is the consumer. After all, if the largest part of the US economy shows signs of weakness, this kills the driver of the world's economy as the US is leading the way at the moment. However, it should be noted that the reading is still fairly strong. However, it is something to be watched going forward.

The Australians came out with a better than expected 5.4% Unemployment Rate for the month of February, as opposed to the expect 5.5% level. This jobs number is part of what drove the Aussie higher for the week, and should be part of the reason that the currency continues to outperform many of the other “risky currencies.” As you can see, the AUD/USD pair took off this week, to reach the middle of the larger consolidation area.

This week coming up:

Some of the things that we are watching include: