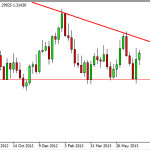 The FX markets were relatively calm during the previous five sessions, as the markets are essentially focusing on one thing: The Federal Reserve's next move. The markets have recently priced in the idea of a taper off (gradual withdrawal) of the quantitative easing program in September, but since then we have seen a couple of signs that the Fed may not actually be able to do this. Needless to say, the US Dollar got beat up for this.

One of the currencies that got the biggest boost is the Euro as one would expect. The pair got a nice pop over the last two sessions, but when you look at the overall market, there are concerns about a possible descending triangle that could send this pair much lower. We currently see this market as having a significant downtrend line, with a base at the 1.28 handle. If this triangle turns out to be true, this market could fall as far as 1.20 sometime in the future. However, we think this move wouldn't happen for a while, and we could even see bullishness over the next several sessions first. This market has a short-term bias to the upside, while longer-term it looks vulnerable.

What gives us a bit of concern is that the commodity currencies are still struggling to find a footing on the US dollar. Because of this, we think the Dollar strength scenario isn't quite over. After all, if the Federal Reserve were to go ahead with the tapering – this is a sign of strength in the economy. However, even if they don't go into that phase – there is still more strength in America than the other G-10 economies. Looking at the Aussie dollar, you can see that the “rally” has been weak to say the least. The 0.90 level still looks to be overly supportive, and until we break that level – there is a chance to bounce. However, there is a ton of resistance above, so this will only encourage people to sell this pair.

We are going to be watching the HSBC PMI numbers on Tuesday for signs of what is going on in China. This will directly affect the AUD/USD pair, as the Aussie is a proxy for the Chinese economy. This being the case, we think this could be the catalyst for a move below 0.90 finally.

Core Durable Goods in the USA comes out on Thursday, and this will be important in the sense that it is another piece of the puzzle when it comes to the actions of the Fed. However, we think in all candor – the news cycle is fairly light this week.