Forex for the week of July 15th – Mixed Bag 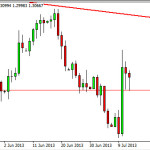 The past week handed us a bit of surprise when the Federal Reserve released its minutes from the last meeting. It suggested that several of the members on the committee were concerned about unemployment numbers in the United States, and that perhaps waiting until they came down to taper off quantitative easing was the correct action.  As the markets have been pricing in a tapering of quantitative easing in September, we saw the US dollar get pummeled against several other currencies.

Subsequently, the EUR/USD experienced a massive spike during the Wednesday session which you can see in the chart below. The pair has since formed two hammers in a row, and it looks like the market is ready to continue higher. However, do we see a weekly downtrend line just above the 1.33 level, so this move could be somewhat handicapped by that. The next few sessions could be decidedly pro-Euro though.

EUR/USD daily. Notice the Wednesday spike in the rate.

It's useful to note that, this wasn't the reaction in all currency pairs. The AUD/USD pair looks horrible, on the cusp of getting ready to continue lower. In fact, the weekly chart formed a shooting star at the bottom of the recent plunge, right at the top of the 0.90 handle, an area of extreme importance to the buyers. If we break below that, we see a move to 0.85 being very likely. It certainly has the look of a market that is about to buckle under the weight of above pressures.

With that being said, it looks like the Dollar will be mixed going forward, which means the Forex markets will be too. It will probably be like this for the rest of summer, as the larger firms are generally out of the markets at the moment, and on the beach instead – soaking up the sun.  Therefore, expect to have to pay extra attention to your trades for the next 6 weeks or so.  Cutting back your position size isn't necessarily a bad idea.

With the confusion involving the US dollar now, pay attention to Core Retail Sales on Monday out of America. Inflationary pressures will continue to be followed, as well as the jobs picture. This number could cause a significant move. 0.5% is the expected result.

Tuesday features CPI year over year out of Britain, and the Pound could be affected due to this. More importantly though, the “Inflation Letter” comes out of the Bank of England that day as well. The GBP/USD pair will be an interesting place to be on Tuesday. Look for more action on Wednesday, as the MPC votes come in as well.

Canada could be interesting on Wednesday as well, as there is an interest rate decision. No action is expected, but the wording is always important. Canada also has the Core CPI numbers coming out on Friday.

Federal Reserve Chairman Ben Bernanke testifies in front of Congress on Thursday. The markets will be watching to see if he expands on the concerns of the FMOC and employment numbers.