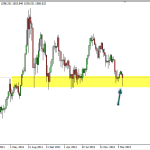 The Forex markets saw a lot of action during the previous week, as would be expected when you have three central bank meetings on Thursday, followed by a Non-Farm Payroll Friday the very next day. Needless to say, this market didn't disappoint, and as a result there were massive profits to be had if you were on the right side of the trade, namely the Yen.

Central Banks and the Yen

The ECB and Bank of England essentially did nothing during the meetings that moved the market other than to “not cut” and “not ease.” This essentially gave the green light for both the Euro and Pound to rally a bit, but in reality – it is hard to think that they both have suddenly entered a bullish market. However, the Bank of Japan announced massive stimulus measures, and as a result the Yen has been absolutely decimated over the final 48 hours of the week. In fact, the EUR/JPY pair even managed to move 750 pips in two days!

Because of this, there is obviously only one way to trade the pair, or the Yen for that matter as the Yen-related pairs all did the same thing. However, buying up at these levels will be difficult, and many traders will be leery of doing so. We have to believe that the market is going to be waiting for a pullback. However, don't make the mistake of being stuck in just the USD/JPY pair, or the EUR/JPY pair – there are plenty of other options out there to short the Yen. Make sure you are giving the other currencies a chance as well, as since this is an anti-Yen move, there will be opportunities all over the place.

It turns out that the reports of the death of gold might be a bit premature. During this last week, we have seen some important technical moves that signal a possible bottom trying to form in the gold pits. Looking at the chart, it is easy to see why the $1,550 level is important: it's the bottom of a larger consolidation area. The area goes all the way to the $1,800 level, and as a result we think that there could be a nice trade starting to set up.

The pundits on television spent most of the last two weeks telling you that both gold and the Dollar couldn't rise at the same time. However, there have been plenty of times they both have, and this isn't necessarily going to be different. With this in mind, it is very possible – and in our opinion likely – that both appreciate as the markets worry about the European Union, and all of the central bank printing out there. We are in a currency war after all…

On the weekly gold charts, you can plainly see that there is a massive hammer sitting on top of this support level, and that the market looks to continue to bounce around at this point. Also, one would have to think that the $1,500 level will be significant as well – as it is such a psychologically important round number.

Earnings Season is Upon Us…

One of the biggest mistakes that Forex traders will make is to ignore other markets. This is deadly, as we are trading the flow of money – and that money needs a reason to move after all. With that being the case, it should be noted that the markets will be tested by the earnings reports that are scheduled in America this coming week. The S&P 500 should be watched, as it is a great barometer of risk appetite. The AUD/USD tends to track the S&P quite well, and as a result, this is one place you might be able to get involved with the overall sentiment. Of particular note is the fact that the financial institutions are reporting on Thursday and Friday – meaning that the week could be somewhat back loaded.