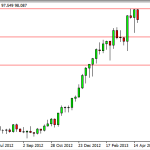 Its that time again….

The Forex week ahead will be important, as the Non-Farm Payroll numbers come out on Friday. It seems that no matter what happens, this announcement takes center stage, and this week will be no different. The report will be parsed by large funds around the world, and what it means for Federal Reserve policy.  There will still be lingering concerns about driving unemployment down, but the central bank has recently targeted 6.5% as a level they would need to see before  starting to normalize monetary policy. Even though there is no chance of a reading below that level, the better this number looks, the more likely that the Fed is getting closer to cutting back on expansive monetary policy. The actual normalization won't be coming anytime soon, but the markets will try to anticipate that move. In this environment, that means a stronger US dollar, as this would more than likely drive up rates in the Treasury markets. Because of this, the world will be watching yet again this Friday.

There is no level in the Forex markets more closely watched at the moment than the 100 handle in the USD/JPY pair. This past week saw another failed attempt at breaking above it, and as a result there will be a lot of people taking losses. The level seems to be as solid as a rock, but there could be a very basic reason for the resistance: Options. There is said to be a massive option barrier at that level, and because of this there will eventually be a time when those barriers are no longer in effect. (Can you imagine being the group of funds that are trying to keep this freight train of a market from going higher?) Certainly, there will be some relieved traders out there on both sides when we finally break out.

We cannot help but think this pair will explode to the upside when the move finally happens. It should be the same in all XXX/JPY pairs, a rapid capitulation by the sellers. Expect to see the 135 area in the EUR/JPY pair act in a similar manner, as this is the pair that has shown the most strength when it comes to a crumbling Yen.

We'll be watching the Kiwi as well….

The New Zealand dollar is currently trying to break out, and have even had a “false breakout” recently. However, it is fighting again – looking to take off. It isn't just against the USD as well, but against many different currencies. Why is this? It appears that the housing market in New Zealand is a bit overheated, and because of this we could see a rate hike. This is something that would make the Kiwi dollar a rarity in this environment, and massively tip the scales in its favor against almost every currency that most traders follow.

This could be a move into a “risk on” environment, or just a reflection on the Kiwi itself. The environment of the markets right now make the hunt for yield paramount, and because of this we could have the perfect situation for the Kiwi soon. We will be watching this currency, and as a result we could be heading into another long leg up in the value of this currency.