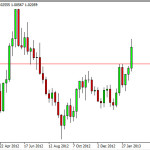 Looking at the past week, we saw a lot of noise in the Forex markets. By far, the biggest amount of noise came from the Federal Reserve and its release of the minutes from last month's meeting. The release showed that several members of the FMOC suggested  there were parameters to cut back on the amount of asset purchases going forward, and this could happen before the markets expected it. This rocked the markets around the world on Wednesday, but by the time we started the Friday trading session, it appears the markets came back to the realization that perhaps the markets overreacted. Because of this, the Friday session was a bit of a “rebound.”

You can see the reaction of the markets on the EUR/USD chart below. US dollar buying started in turn, and various markets saw extensive Dollar buying. The oil markets in particular got pummeled, but as you can see the currency markets weren't immune:

The Euro will be in focus this coming week, as the Italians have elections on the 25th. The biggest issue the markets fear is that most of the Italian candidates for Prime Minister as at least somewhat anti-austerity. This could cause massive disruptions in the debt process in the EU, and send the markets running for cover. If the wrong coalition of PM wins – the Euro could get hit significantly as the Italian economy is the third largest in Europe.

The USD/CAD pair could come into play over the course of this week seeing pair broke out and above the 1.01 level. The pair hasn't been acting quite right lately, as the oil markets continue to go higher while the Canadian dollar loses value. However, there are a lot of moving pieces in this market, not the least of which is the “sequestration” in the United States. The Canadians send 85% of their exports into the USA, so to think that a possible slowdown in America won't effect the Canadian economy is simply not paying attention. As you can see on the weekly chart, USD/CAD has broken out. However, we see a bit of exhaustion on the daily chart, and as a result a pullback could be coming. We suspect that the 1.01 level will be tested as support going forward, as it was previously resistance. We believe that a move to 1.04 is very likely.

Ben Bernanke, the Chairman of the Federal Reserve testifies in his biannual meeting at Congress, and there will be a lot of attention paid to what he says. This is especially true since last week's freakout in response to the minutes. If Mr. Bernanke talks up the virtues of quantitative easing, we could see a sell off in the USD overall. With all of the various headline risks out there over the week, we suggest that the FX markets may be volatile over the next several sessions.