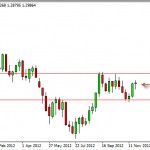 Unfortunately, we cannot write about the upcoming week in the FX markets without mentioning the US “fiscal cliff” drama again. With this being said, there is a high probability that we will get headlines during the week that will push the markets around back and forth. We are simply going to be stuck in a “risk on, risk off” type of market until the U.S. Congress can decide what it is going to do.

That being said, if we ever do get some type of agreement out of congressional leaders, we will certainly see a massive “risk on rally.”  If that happens, we expect the US dollar to get severely punished. After all, when it is suddenly a “risk on” type of market, the Dollar is the first thing that gets sold off.  Interestingly enough, we are starting to see several FX pairs suggest that risk appetite will come back into the marketplace. One such example is the EUR/USD pair, as it formed a hammer that is situated at roughly 1.30 for the week. Having said that, there is the matter of the currency pair been stuck in a range between 1.27 and 1.3150 at the moment. Again though, if we do get that announcement this pair will almost certainly break through the resistance.

It should also be noted that other “risk on” type of currency pairs are starting to show signs of strength now. For example the EUR/JPY pair is very sensitive to the risk appetite of the market. This pair certainly looks strong as we have formed a hammer at the 105 level. This hammer confirms support at 105, and does in fact suggest that we are going up to the 110 level. This would not be happening if the markets had an underlying weakness to them. Also, it should be noted that the markets have rebounded every time bad news has come out. This is been seen in the commodity markets, stock markets, and most certainly the Forex markets over the last several sessions. It is because of this that we think the market is poised to rise as far as the risk appetite is concerned, and is simply will take that announcement out of Congress to really push things into high gear.

There are going to be other things to pay attention to this week obviously, and we get important information right away on Monday. The US ISM Manufacturing PMI numbers come out at 9 AM Eastern standard time, and this is almost always a market moving event. This will have a direct correlation with what direction the stock markets take, and in fact could move the USD/JPY pair more than many others, as that pair seems to be very sensitive to US economic numbers lately.

Tuesday will be important for both the Canadian dollar and Australian dollar, as both of those central banks have interest-rate announcements. The Australians are expected to cut their overnight rate by 0.25%, while the Canadians are expected to hold firm. During the last Reserve Bank of Australia announcement, markets were taken aback as the RBA held their interest-rate instead of cutting. There is a possible shock coming from Sydney on Tuesday, so this of course will have to be paid attention to. Obviously, this can have a great affect on the Australian dollar. As for the Canadians, it seems very unlikely that anything other than holding firm will happen.

On Wednesday, the RBNZ will have an interest rate announcement as well. Currently, the New Zealand economy has been fairly steady and as a result no changes expected. Just four hours later, the Australians will release their employment numbers. This of course can move the Australian dollar again, but in less there is some type of massive shock, It seems very unlikely that we will see anything lasting out of that announcement.

Thursday isn't to be outdone either. We have interest-rate decisions out of the European Central Bank, as well as the Bank of England. Neither one of these central banks are expected to change their outlook or interest-rate, but if one of them does this will certainly move the markets. Of particular interest will be the press conference from the ECB as that region is without a doubt front and center and many traders minds.

Finally, on Friday we have the Non-Farm Payroll report out of the United States. Under normal circumstances,  the week would be very quiet by the time Wednesday rolled around, but with the major announcements and the Congressional issues going on at the same time, we expect extreme volatility this week, and as a result would suggest caution be taken over the next five sessions. Remember, we are getting towards the holiday season as well, and look what he will start drying up over the next couple of weeks. As we get later into December, we will see more erratic price action.