Euro, Yen, and Commodity Currencies for the week of January 14th 2013 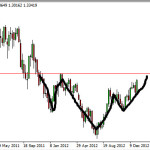 During the past week, we have seen quite a bit of movement in the Forex market. The most obvious place to start is in the Euro, as the EUR/USD pair has absolutely taken off like it had been sitting on a launch pad at Cape Canaveral. The move was predicated mainly upon what the European Central Bank Chairman Mario Draghi stated on Thursday. He essentially said that the Euro-zone had no serious economic issues, and as a result it seems very unlikely that the ECB would have to do any type of monetary easing. It appears that the market had been anticipating rate cuts out of the ECB, because after he stated this in the question and answers session after the meeting, the Euro absolutely skyrocketed against everything.

As you can see in the EUR/USD chart below, the 1.3150 level was broken through on Thursday, followed by the breakout on Friday that cleared the 1.33 handle. This area had been considered to be very resistant before, but now with a few choice words this entire outlook has changed. Granted, there's probably going to be a bit of choppiness all the way to the 1.35 level, but it should be noted that the 1.35 level is a potential “neckline” for an inverted head and shoulders pattern that would measure a move all the way up to 1.50 if completed. Needless to say, that would have us thinking that a long-term up trend could be forming.

The saga with the Bank of Japan continues, and the Japanese Yen has been absolutely decimated against most other currencies. Because of this, it appears that the short move in the Yen is primed to continue. The only hiccup of course would be the fact that there is a Bank of Japan meeting on the 21st and 22nd that will determine what their next course of action will be. The market has sold off the Yen against other currencies so viciously that we believe there is a real possibility of a “sell on the news” type of move once the Bank of Japan makes its announcement.

However, we do believe in the long term selling of the Yen, and as a result will see this as an opportunity to start buying the EUR/JPY, AUD/JPY, NZD/JPY, and USD/JPY pairs. It's possible that all of these pairs will continue to climb this coming week, but once we get close to Friday, is very possible that people may start to take profits as they don't know whether or not the Bank of Japan will underwhelm when they come out with their announcement.  Disappointment risks definitely outweigh the possible excitement risks out there, and as a result pull-backs will be greeted with open arms by us.

Going forward, it seems us that the “risk on” rally will continue to push Forex markets higher as far as the risk appetite is concerned. The Australian dollar and New Zealand dollar both saw pull-backs towards the end of this past week, but we think that they will eventually be some of the favoured currencies as traders look to put on more risk. Because of this, we think that this week should see the pull-back in these currencies that should give you the ability to start buying them for the longer-term trend higher.