Dollar Strength Set to Continue. Forex for the week of March 11th, 2013. 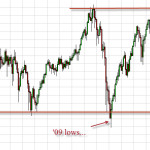 Last week, we had suggested that the US dollar was set to gain in strength, and over the last week – we think this has come to pass. The most obvious example of US dominance in the markets at the moment is the fact that the Dow Jones Industrial Average is now at all-time highs. With this being the case, it should be kept in mind that the S&P 500 is also approaching that achievement as well. Looking at the chart below, you can see how drastic this rise has been:

While we focus on Forex here, it is important to understand that the rise of the Dow Jones has been meteoric, and also shows just how the liquidity push by the Federal Reserve has moved things. After all, the bond markets aren't offering much in the way of yield, so money simply hasn't had a choice but to move into stocks. By far, the favored ones have been the dividend paying stocks, and the Dow is full of them. Looking at this rally, you can also see that a lot of money has been flowing into the United States.

Going forward, we need to understand that this past week was important for the British Pound as well. The Bank of England failed to deliver more asset purchases, or other forms of quantitative easing during its meeting this week, and as a result we saw the Pound spike for a short covering rally. However, as the United States announced that it added 256,000 jobs in the month of February during the non-farm payroll announcement on Friday, the GBP/USD got pummeled. In fact, it lost roughly 100 pips in a matter of minutes. With the market closing below the vital 1.50 handle – it is likely that we will see continuation. Below is the 5 minute chart, which shows the impact of the flood of money into the healthier of the two economies:

What is most important is the fact that the pair stayed down there, this leads us to believe there is more weakness coming. With this being said, it appears that the US dollar is going to remain King for a while. This can be seen in many other pairs as well, as the Euro, Aussie, and Yen have all been showing serious weakness against the Greenback. With the UK and EU both showing signs of economic weakness, if not downright recession, it makes sense that money wants to come to America as that country has something investors love – economic growth.

With this being the case, there should arise several different themes over the next couple of weeks. For starters, the “risk on, risk off” play seems to be dead, and the correlation of a weaker Dollar with stronger risk appetite seems to be gone. Because of this, we are seeing Dollar strength everywhere, while the stock markets continue to gain overall. Many of you haven't been trading long enough to remember that the Dollar can rise right along with the S&P 500, but it most certainly can.

Another theme you will more than likely see is that commodities may be a bit soft. However, many of them are oversold at the moment, and this could cause a bounce in the short-term. The ability for the Dollar to continue to rise is fundamentally different than it used to be: We are seeing money come into the US in order to invest, not to buy Treasury notes. With this being said, it seems that there is still a bid for those notes, so while the equity markets should continue to do well, the Treasury markets will continue to hang on. The yields on the ten year note won't be spiking anytime soon, the Federal Reserve will see to that as it continues to buy massive amounts of US debt.

We believe that the strongest trade at the moment will be to buy Dollars, and sell anything Europe-related. This could be Pounds, Euros, or Francs. While the indices over there do well, the currencies are looking very weak.