Could the Yen Finally Break Down? Forex Week of December 17th 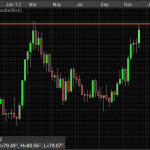 Over the course of the last several months, the world has simply been waiting for the Japanese yen to fall apart. There have been several false rallies in that time period, and many traders out there have gotten burnt shorting the Japanese yen recently.  Despite this, there are signs that we may finally be ready to sell-off the Yen going forward.

One of the biggest factors in the Forex markets this week will without a doubt be the results of the Japanese general elections.  The opposition party, the LDP, looks set to take control of the lower house and possibly the position of Prime Minister.  Mr. Shinzo Abe, the LDP candidate, has already said on more than one occasion that he is going to pressure the Bank of Japan to do extensive quantitative easing and aim for an inflation target of 2 to 3%. Presently, Japan is in a state of deflation, so this means they will have to print massive amounts of Yen.

This is nothing new for the Bank of Japan to be doing. However, this time we could see the central bank getting overly aggressive as the Japanese government has even suggested they were willing to change the walls in order to strip the central bank of some of its independence.  Simply put, there is a good chance that the Japanese are going to absolutely wallop their currency.

All signs point to the Bank of Japan becoming really aggressive in its fight against the value of the Yen.  Empty threats will no longer suffice.  This will more than likely show up against several currencies it wants, and in fact we do have several charts that look very bearish for the Yen suddenly. The US dollar, the Euro, the South African Rand, the British pound, and many other currencies all suddenly look like they're about to put a beating on the Yen, and many have either broken out, or are right on the verge of doing so.

Take for example, the EUR/JPY pair which has reached the all-important 110 handle as of the close of business on Friday.  You will notice that the Thursday and Friday candles have both formed hammers, and it looks like the pair is ready to explode to the upside again. This will more than likely happen if the LDP manages to gain 320 seats in the lower house of Parliament as that is enough to give them a super majority and push their agenda through. However, there is also talk that the Bank of Japan may have no choice but to extend its quantitative easing regardless of who wins, as the economic numbers in that country are deteriorating.

The real signal will be found in the USD/JPY pair, as the 84 handle will be massive resistance. However, it does look like we're challenging it, and it should be stated that the market hit the level on Friday, but did pullback slightly.

With that being said, the election results will determine the which side of 84 this market will go to. If the 84 handle gets broken by the bullish traders out there, we could see a real run on the Yen, selling it off drastically. This would have an effect in all Yen based currency pairs, and we would see gains in such pairs as the CAD/JPY, AUD/JPY, GBP/JPY, ZAR/JPY, USD/JPY, and EUR/JPY.  In fact, if we manage to break that 84 handle on a daily close, it is very likely that this becomes a buy-and-hold type of trade in the various Yen related pairs.