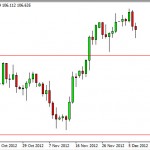 However, the non-farm payroll numbers that came out on Friday were very bullish at first. After all, the United States added 145,000 jobs for the month of November. This was much stronger than anticipated as the super storm Sandy ravaged the northeastern part of the United States and should have put a dent in hiring and retail sales.  Interestingly, according to the Bureau of Labor Statistics, this didn't happen.

With this being said, the jobs number was in fact impressive at first glance. However, it should be noted that 350,000 people simply “disappeared” as they stopped being counted because they have left the labor force. They simply gave up looking for a job.  For the time being the market seems to be willing to overlook such details.

By the end of the session on Friday, we saw several of the “risk sensitive” currency pairs show signs of support and possible bullishness on Monday. The EUR/JPY pair formed a hammer at the 106 level, which does in fact suggest that we are going much higher. This pair typically will mimic what goes on in the stock markets globally, and as a result we may see a “risk on” rally around the world, at least for the short-term.

Another pair that will be worth watching is the USD/CAD. This is because we spotted a support zone going down to the 0.9875 level, and we are currently hovering just above it. The Friday candle broke below the hammer from the Thursday session, and this would have been predicated upon the non-farm payroll numbers been so strong.

Typically when the non-farm payroll numbers are strong, it actually gives a boost to the Canadian economy. This is because the Canadians send 85% of their exports into the United States,  consequently creating more demand for the Canadian dollar. Also, it should be noted that the Canadians had a very strong employment number of their own for the month, and as such this pair looks like its ready for a fall.

If we can get a breakdown, we think that we will head down to the 0.97 level in fairly short order. As we get into the middle part of the month of December, liquidity will dry up in the Forex markets, so the moves could be sudden and much quicker than expected.