Trading the Cup and Handle Pattern 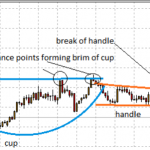 William O'Neal gave us the cup and handle patterns in his 1988 book titled “How to Make Money in Stocks”. Even though this chart pattern was initially developed for the stock market, the forex market can also be traded with chart patterns and so the cup and handle pattern has been successfully applied to the technical analysis of the forex market.

The cup and handle pattern is a bullish continuation pattern, made up of two parts: the cup and the handle. The cup and handle pattern indicates a period of price advance following an initial bullish period and a period of consolidation. The initial bullishness is formed after a rounding bottom occurs. This rounding bottom is what forms the cup. Then follows a period of price consolidation (the handle), and at the completion of this handle, the price breaks out and resumes the bullish trend.

Tracing the Cup and Handle Pattern

The cup and handle pattern is a complex pattern and it is imperative that the trader is able to trace it correctly in order not to make mistakes. What forms the “cup” part of this pattern is actually a rounding bottom pattern, which has been discussed here.

The trader should first start from the correct trace of the cup. A cup whose curve is too steep as to form a “V” rather than a lightly curved “U” will not produce a good cup. A good cup should be deep enough but not too flat as to resemble a saucer. The depth of the cup should be equivalent to a 1/3 to 1/2 retracement from the high of the initial trend.

The brim of the cup should be formed by a resistance line that cuts across two points on the price action, directly above the cup.

Following this is the handle, which is actually a period of consolidation. A handle may resemble a pennant or a flag. Here the price will oscillate between the upper and lower trendline that forms the handle.

Once the cup and handle have been identified as the price action of the currency pair evolves, the trader should prepare for a bullish breakout by observing a period when the candlesticks close above the upper trend line of the handle. When this happens, the breakout will occur to the upside. The cup and handle pattern is a bullish pattern, so the only trade possible here is a long trade.

The only point at which a BUY should be initiated should be at the break of the upper trend line of the handle aspect of this pattern.  Take a look at the chart below for the fine details of the cup and handle pattern:

The exit strategy for this pattern should be to use the pip distance between the brim and the lowest part of the cup, and extrapolate this to the distance between the candle break and the upside. After the first target is reached, the trader can close half the position and apply a trailing stop to chase the price action to its logical conclusion.

Profiting with Rounding Tops and Bottoms

Trading the Head and Shoulders Pattern