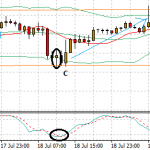 We have all heard the saying that “the trend is your friend until it ends”.  But what happens when the currency pair has no defined trend? What happens when the currency is range-bound or in consolidation? Is the asset still tradable?  Many traders would simply walk out of the market, waiting until the next trend has formed. However the smart ones would adopt the strategy that we will talk about below.

There will be periods that the market would be in consolidation, and believe it or not, this strategy has a great degree of accuracy when the asset is trading in a range, with highs and lows that can be fairly defined.

Components of the Strategy

The strategy will be traded for the short term, because we feel that short term ranges are easier to trade and have a better defined pattern of predictability. Trying to trade ranges on the long term charts would take too long to form and would end up tying up capital. The time a trader would take waiting for a range to form on the daily chart is enough to deliver several profitable trades with other strategies; so why wait?

The hourly chart would therefore form the best time frame for this trade strategy. It is not too short and not too long, and is suitable for intraday range trading.

a) Bollinger band (default settings)
b) Stochastics oscillator (set to 10,3,3)

The first step is to open the hourly chart for the currency to be traded, and apply the indicators with the described settings. Then check to see if the currency pair is range trading.

Usually, if there are three or more areas where prices have formed highs or lows that can be connected in the same horizontal plane, then it is most likely that the currency pair is range trading.

Look for where a bullish candlestick reversal pattern forms on the lower Bollinger band, at a point where the lines of the Stochastics oscillator cross at <25 (oversold condition). Please note that the candlesticks must be reversal candlesticks. A bullish engulfing, bullish harami or bullish pinbar pattern is preferred.

Look out for an area where there is a bearish candlestick formation on the upper Bollinger band, where the Stochastics oscillator has crossed at >75 (overbought region). The preferred candlesticks are bearish pinbars, bearish engulfing or bearish harami patterns.

The exit point should be the middle Bollinger band, but if the price advacnes towards the lower Bollinger by at least 15 pips, you can apply a trailing stop to chase the price and close out the trade when there is a reversal.

See chart examples of the long and short entry signals, occurring one after the other on the same time frame.

Due to the fact that in a range bound situation, there will be at least 5 to 8 trading opportunities on the buy and sell side, the trader should not aim for too many pips at a time. Just take what the market gives you between entry point and the middle Bollinger band.