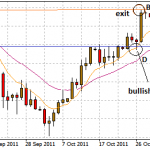 Pinbars commonly occur anywhere on the chart, but they are of paramount importance when they are found at the top or bottom of a trend.

The pinbar trading setup we will discuss today will employ pinbars as instruments of price reversal. We will therefore use pinbars along with the pivot point calculator to identify places on the chart which can be used as entry points for long and short trades.

For the purpose of this discussion, we would like to use the pinbar trading strategy to trade a maximum of 6 signals a month. This will require a very patient approach and the use of definite signals to produce great profits.

Components of Our Pinbar Trading Strategy

The principle behind this trading system is to use the appropriate reversal pinbars on the respective support and resistance pivot points to locate areas where to buy or sell a currency pair, with a long term approach to the trade.  In order to do this, we will use the daily chart, pick a sure signal and try to get at least 300 pips from a single trade. This will expose us less to the intra-day noise created by scalpers and day traders, and put us on the path that the institutional long-term investors follow.

The pinbars used are as follows:

The best pinbars are the ones with very long shadows and short bodies.

These are the conditions for a long trade entry:
a) Bullish pinbar forming on a support line – S1, S2, S3 (and daily pivot under certain conditions). The support line can also be derived from a line drawn across a previous major resistance (see snapshot below).

b) The 8EMA crosses above the 21EMA, and both exponential moving averages turn upwards well before the bullish pinbar signal, indicating that the trend reversal from downtrend to uptrend is well underway. This prevents fakeouts.

c) If the pinbar bounces off any of the EMAs as well as the support lines, the signal is reinforced.

The key levels of consideration are:

– the blue support line on which point C shows an area where the price of the asset had failed to go below (12 Aug 2011) which would make a good support area for the future (point D) that would serve as entry point for a long pinbar trade.

With a 100 pip SL and a 341 pip profit, the risk:reward ratio was roughly 1:3 which was indeed a spectacular trade.

The conditions for a short trade entry are as follows:

a) Bearish pinbar forming on a resistance line – R1, R2, R3 (and daily pivot under certain conditions). The resistance line can also be derived from a line drawn across a previous major support.

b) The 8EMA crosses below the 21EMA, and both exponential moving averages turn downwards well before the setup occurs.

c) If the pinbar bounces off any of the EMAs as well as the support lines, the signal is reinforced.

Again, we look at our reference points:

– the resistance line on which we have a point A that shows where three candlesticks failed to go above a price level. A resistance line drawn across these points will form a reference point B which will serve as an entry point if a pinbar forms there.

– the support line drawn from a region of previous support (point C) and which will form the basis for a future exit from our trade at point B.

Sure enough, a bearish pinbar formed at point B, and pulled back from the 21EMA, providing a double confirmation. This was after the 8EMA had crossed below the 21EMA. Even though the bearish move extended beyond our projected exit point, it is good practice to exit at a point already identified for this purpose.

News Releases to Bank With: The US Core Retail Sales Report