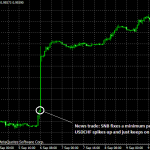 Fundamental Analysis: How to Trade

a) Following release of the news numbers, there is a spike which could occur in any direction. The height of the spike is determined by how good or how bad the news report is; good or bad in this case referring to the direction of deviation. In some instances, the price action exhibits a fluttering/oscillating pattern where it just rapidly moves up and down in a tight range without any clear direction (choppiness or whipsaws). This occurs when the news release send mixed signals to market players.

b) If there has been a clearly defined spike, there will follow a period of retracement as those traders who got into the trade early and partook of the spike, start to take profits. This situation occurs 80% of the time. Orders from institutional players form the bulk of the spike. Indeed, it is the large order flows from this group of market players that create the spike. There are also times when there is no profit taking retracement at all and prices just keep advancing as we see in this news trade below.

There are also situations when a currency asset spikes in one direction and completely retraces beyond the pre-news release levels. This behaviour is famously displayed by the EURUSD during the Non-Farm Payrolls release and that is why trading the NFP with the EURUSD is not usually advisable. This also highlights the need for a trader to study any currency pair to be analysed fundamentally to gain familiarity with its behavior to certain news releases.

c) Depending on what happens in (2) above, the trader may decide to:
– quit the trade after picking some pips from the initial spike.
– make a re-entry after the retracement is over. This is also where those who missed the initial train can get in on the action.
– take no action.

For those who intend to trade the spike and gain from the initial movement, securing a source for news release with ultra-low latency and getting a trade server close to the source of news release is an absolute necessity. Failure to do this will result in being blown off by the price retracement that will follow the institutional traders dumping their positions on the poor retail traders that got bad fills.  Indeed, news trading is such a fast and dynamic event that there is simply no way a trader will get good fills if he is late on entry. This is the single reason behind many bad cases of news trading losses incurred by retail traders. If you are unable to get access to any of these news trading tools, please trade the retracements instead.

Please note that there is no sure way of knowing when a retracement will end. The best you can do is to study historical behaviour of the currency to the news trade in question, and see if you can replicate a pattern of retracement behavior.